The ABC Murders by Agatha Christie 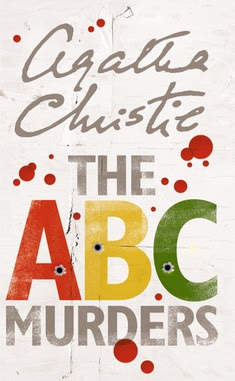 
This book has a very modern feel to it. There appears to be a serial killer on the loose who is killing random people in random places based solely on the alphabet, in alphabetical order. And the killer sends a letter to Hercule Poirot before each murder occurs. This is extremely troubling to the great detective. He is told the name of the town and the date a crime will take place. The very first of these letters says:

Mr. Hercule Poirot, - You fancy yourself, don't you, at solving mysteries that are too difficult for our poor thick-headed British police? Let us see, Mr. Clever Poirot, just how clever you can be. Perhaps you'll find this nut too hard to crack. Look out for Andover, on the 21st of the month.
Yours, etc.,
A.B.C.

Poirot fears the worst - murder, and he is right. An old ('close on sixty!') woman named Alice Ascher is found dead in her tobacco and newspaper shop. Nothing was taken. Could it have been her abusive husband, from whom she was separated? Poirot wonders aloud:

'And was there nothing - how shall I put it - introduced into the shop? Nothing that was odd there - incongruous?'

And it turns out that yes, there was something, an ABC railway guide. Poirot is certain it was left on purpose because there are no fingerprints.

An innocent man would have left prints - a guilty man would not.

The crime remains unsolved, and then a month later a second letter arrives:

Dear Mr. Poirot, - Well, what about it? First game to me, I think. The Andover business went with a swing, didn't it?
But the fun's only beginning. Let me draw your attention to Bexhill-on-Sea. Date, the 25th inst.
What a merry time we are having!
Yours etc.,
A.B.C.

In the early hours of that day, a young woman named Betty Barnard is found dead on the beach.

As you may imagine, this whole thing is awful for Poirot to be taunted in this manner, his whole being put into question, and awful for Hastings watching his old friend fail in apprehending the 'homicidal maniac.' Again, this gives the book a modern feel - a psychological battle between killer and sleuth.

The victims do not seem to have any connection to one another, other than the fact that

'An ABC open at the trains to Bexhill was found actually under the body.'

My trusty Agatha Christie, A Reader's Companion offers a photograph of a 1936 summer Railroad Guide. 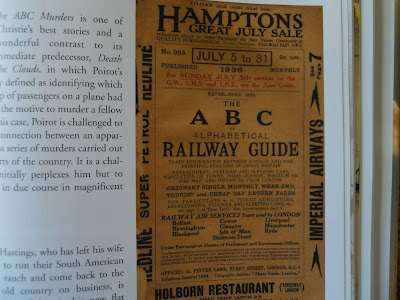 The ABC Murders is one of the best Agatha Christie books I've read. I was riveted by the mystery, and could not imagine how Hercule Poirot would ever be able to find this killer. I highly recommend it.

A little note: as I was writing this book report, I had my Kindle beside me at the computer so I could quote some passages. When it turned off, there was Agatha's lovely face. I hope she knows how very, very much she is appreciated after all this time, and that her book from 1936 is still intriguing and interesting 75 years later.
Posted by Nan