War on the Margins by Libby Cone 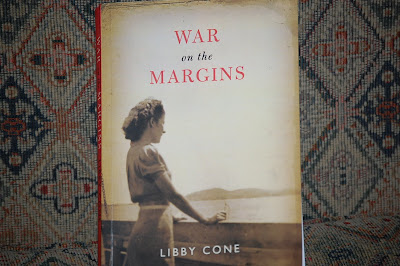 
I am so grateful to Maureen for sending me this book, and I would like to pass along the kindness by offering a giveaway. Please leave a comment on any post telling me that you would like the book, and a week from today, June 26, I will draw a winning name. I'll send it anywhere. Just two little things: one, it is an 'uncorrected proof' and two, there are a couple little love scenes if there are readers who don't like that sort of thing. :<) This is an important book. It deals with what happened to the people of Jersey when the British government gave up on the Channel Islands. They were:

deemed indefensible and were to be declared a 'demilitarised zone.' The Germans would be allowed to take over. Churchill had been convinced of the Islands' lack of strategic importance.

Can you imagine? You are a British citizen, living on British soil, and you are a captive of the enemy . We are so used to the newsreels of brave Londoners. How must these people have felt? There weren't any newsreels showing their endurance. There weren't even mentions of them in the news.

Not a word about the occupied Islands, though everyone yearned not to be forgotten. Which was worse: to flee into Underground tunnels most nights and sit in the damp as the bombs thudded down, or to see one's street overrun with German soldiers and vehicles, and the sunny beaches pockmarked with mines? To have to watch one's step, hold one's breath, keep a pleasant face so as not to upset the wrong person and end up in prison? To find you couldn't trust your local government?

The book is based on the author's thesis. She was encouraged to make it into a novel, so there are some parts which are true, such as lists of citizens, actual orders from the Germans, and two artists in the book who were real. The book's chapters alternate between newspaper reports, official proclamations, and stories of various people on the island. There is the slow, awful build-up of anti-Semitism as there was in every place the Germans occupied, including Germany itself. One day all Jewish people are to be declared 'foreigners.' Another day they cannot shop except for an hour a day. It escalates quietly and relentlessly. I could hardly bear it. There are unimaginable horrors. Food is a huge issue. The major nourishment comes from swedes (rutabagas) and potatoes, often shriveled and really inedible. Sometimes farmers leave items out for those in hiding, but more often the people eat what they have to, including rats. I don't know if I could do it. But I've never been put to the test, and pray I never am.

The author has put together a list of books about this subject.

Here is a little background I read online:

The Channel Islands are neither part of the European Union or the UK, however they are part of the British Isles, with the British Sovereign as their Head of State. The Bailiwick of Jersey comprises the largest island, Jersey, and its islets, while the Bailiwick of Guernsey includes Guernsey, Alderney, Herm and Sark. The Bailiwicks have their own parliaments and are proud of their autonomy, which was granted to them by King John in 1204. In many ways the culture of the islands is closer to Normandy than the United Kingdom.

Then, in 1939, this happy-go-lucky resort suddenly found itself the only British soil to be occupied by German forces during WWII. This incredibly harsh period of Channel Islands history can be seen in numerous, poignant sites, including the many highly visible German fortifications.

For nearly five years, Jersey was under German rule and, along with the rest of the Channel Islands, it was the only part of Great Britain to be occupied during World War II.

Nobody expected Hitler to invade the Channel Islands and Jersey was still being advertised as the perfect holiday destination just a week before the Occupation started on July 1st 1940, eight months after Britain declared war on Germany. The British Government had left the Islands unprotected a fact that was not made known to the German forces and so, not surprisingly, they bombed Jersey before invading.

Initially the Islands were used as a place for rest and relaxation for the troops but the occupiers soon set about Germanising the Islands - the language of the road signs was changed, cars had to drive on the right and schoolchildren were forced to learn German - which incensed the local population.

In such small Islands with no military capabilities of their own, it was impossible to organise a resistance movement, but the majority of Islanders fought back in their own way by refusing to co-operate with the regime.

The German authorities would not tolerate even small acts of defiance and anyone caught listening to radio broadcasts from London or painting V for victory symbols over German signs would be sent to prison. Greater offences, such as sending carrier pigeons with messages to England or even showing kindness to the slave labourers working in the Islands, were punishable by death.

Please read Maureen's excellent review and her exciting update, and dovegreyreader's wonderful influential review, part of which is quoted on the back of War on the Margins.

And here is the website for the book. War on the Margins is available for pre-order here. It comes out on July 23.
Addendum: Heather just gave me a link to another review which is here.
Posted by Nan