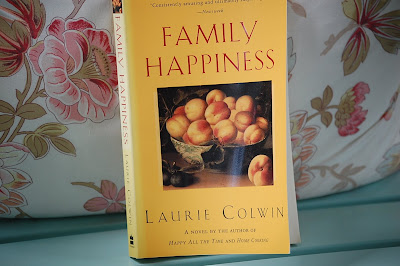 Family and happiness are wonderful words, yet this book often made me feel sad. When we first meet the Solo-Millers, they seem so happy. They eat together on Sundays, they celebrate major and minor holidays, they vacation together in Maine. They are comprised of an older mother and father, and their three adult children and their families.

In general, the Solo-Millers preferred the company of their fellow Solo-Millers to that of other mortals, and they gathered frequently.

If you are part of such a family, or know this kind of family, you are aware that there are stresses and strains beneath the 'perfect' exterior. There is often a controlling parent or grandparent who 'requires' attendance. And not only physical attendance, but emotional and lifestyle attendance. One is accepted if one toes the line, lives the life, accepts all the rules. Dora Solo-Miller has always done so. She is the only daughter, and the child who holds everything and everybody together. It has always been her role, and she doesn't realize that she hasn't been appreciated until she begins an extramarital relationship with a painter named Lincoln. In fact, symbolically, he is the only person who calls her by her real name, not her family nickname which is Polly.

There are family idiosyncracies, which from the outside may seem endearing or cute. The father has a food 'thing' whereby his food must be washed with soap and water. The mother never gets names right.

It was a family joke that Polly had married a lawyer named Henry [the name of her father and her brother] in order not to give her mother anything to screw up.

Again, this is symbolic. Not only does her husband have the same name, but she is living the same kind of life in which she was raised. 'Her' Henry isn't a bad man. He is kind, and good with the children, but he works long hours. Polly has great kids and a part-time career, though her mother 'won't' learn what it is her daughter does, and is critical of the time she spends away from home. The mother, Wendy, spent way more time away from her own children but because she was doing volunteer 'good works' she thinks of herself as the 'better' mother. It may be easy for us to judge Polly: to say how dare she have an affair; how dare she feel badly about her life when she truly does have everything. Her husband even tries hard to change his work habits to make their life happier.

Family Happiness explores an adultery that is not shown in books or movies. Polly's infidelity is a release, an escape, not only from her husband but from the family she grew up in. It isn't simply a physical relationship, but her first real friendship outside of her family. I have seen this kind of family in action, and I have observed that it is nearly impossible to change either the people or the situation. What often happens is that a member will move far away. They must move because there is no use in confrontation. The parents or the grandparents will not change. Ever. That's just how it is. The only hope is distance, or in Polly's case, an affair. The man she comes to love will never be a threat to her 'family happiness.' He loves her, but he is a loner who values his solitary, artistic life beyond everything else. He will never demand she leave her husband (and family) for him. And Polly would never do so, though she suffers greatly living two lives. He truly does care for her, and sees her in a way her family never will. He gives her back herself, in a manner of speaking. He shows her how she has been treated, how she has been taken for granted, and how she really is as a person.

I believe Laurie Colwin was a genius. Her death at 48 years old in 1992 is a great loss to those who knew her, and also to her readers.
Posted by Nan