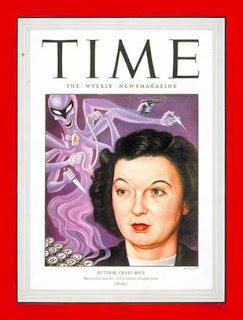 Today I read Beyond The Shadow Of A Dream, a 1955 story by Craig Rice. It was in the January 2006 issue of Ellery Queen Magazine.

A star of such magnitude that her picture appeared 60 years ago this January (1946) on the cover of Time magazine, Craig Rice is seldom reprinted today. The name (the best-known pseudonym of Georgianna Ann Randolph) has all but dropped from readers' awareness.

Jeffrey Marks has written a book about her which I'd like to read. 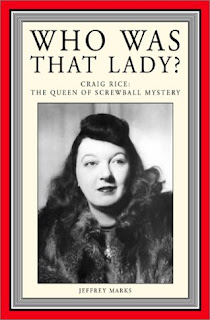 Who Was That Lady?
Craig Rice: The Queen of Screwball Mystery
by Jeffrey Marks

Craig Rice, the author of fourteen novels, countless short stories, and a number of true crime pieces, once rivaled Agatha Christie in sales. She was on the cover of Time Magazine in 1946. However, the past fifty years have seen her fall into relative obscurity. Rice made for an interesting subject for a biography because nearly every identification point about the author was in dispute: her birth, her real name, her number of marriages, number of children, her canon of fiction, and the cause of her early death. Marks had to wade through years of research to come up with the answers to those questions. Following a trail that went from Venice, Italy to Venice Beach, CA, he talked to a number of her contemporaries, her family, and friends to come up with an engaging book that reminds readers why Rice remains the undisputed queen of the comedic mystery.

I own one of her books called Home Sweet Homicide published by the Rue Morgue Press, which is pretty much single-handedly bringing back into print the old mysteries from what is known as "the Golden Age of Detective Fiction."

This thirteen page story was such a good one. Tight, well-told, and had me guessing till the end. A psychiatrist visits a lawyer friend and tells him he is having dreams about murdering people. It turns out that after the dreams, the newspaper has stories about those very murders. Of course, once it was explained, I thought oh, of course. :<) I couldn't ask for more from a mystery tale.
Posted by Nan