I did a post in July called Six in Six - 2019. I've been looking at the blog where the idea came from to see if she did a similar post for the second half of the year, but I can't seem to find one.

Anyhow, I thought I would write about July through December, using the same questions she asked for the original Six in Six. As in the first post, some books, series, and/or authors are mentioned in more than one category.

1. Six Authors Who Are New to Me

H.Y. Hanna
I finished her Oxford Tea Room series, now up to 10 books! I read book one in the English Cottage Garden series. And I read the three books in the Tender series. These were quite different from the other two series. The books were set in Singapore. They were more suspenseful and I did like them, but they were a bit darker than I usually care for. I don't know how she can write so many books! I'll read them as fast as she writes them.

Susan Branch
Although I've bought her cookbooks, birthday books, address books, stickers, etc. for years and years, and I read her blog and follow her on Instagram, I have never read a book by her. I read all three of her memoirs, filled with her wonderful drawings - The Fairy Tale Girl, Martha's Vineyard Isle of Dreams, and A Fine Romance  Falling in Love with the English Countryside. She actually wrote the last one first, and then went back to her beginnings in life, and her move to the Vineyard. I read them all in September and was a happy, happy reader. I loved them so much.

Kathi Daley
I read more of her Holiday Bay series books, and have bought three more. I do enjoy the people and the Maine setting.

Elizabeth Spann Craig
I read the first in her new Village Library series. I really liked it, and look forward to more.

Laurie Frankel
I read This is How it Always Is about a family whose son feels like he is a girl from a very young age. The author's own child experienced this so she knows what she's writing about. This is a very important book about a subject no one really knew about a short time ago. It was an excellent book. We get to know the family, their reactions, their strategies, their strengths and weaknesses. The love is so evident among these people. There is a cool corresponding tale the father tells the children at night. I loved this book.

T.E. Kinsey
I am wild about his Lady Hardcastle series. I'm on the 6th, and last so far. The woman and her maid move to the country, and murder finds them. We get hints of their past adventures. The maid and the Lady are really strong friends, though the former still does "maid-ly" type things for her. Set in the early 1900s. The sixth book is in 1910. I hope this series goes on and on. There is humor and warmth, and the mysteries are good ones.

2. Six Authors I Have Read Before

Stewart O'Nan
I read his latest, Henry Himself and then went back to read Emily, Alone. I love these books.

Karen McInerney
I love her Gray Whale Inn mysteries, and read them as soon as they are published. There are nine so far, with more coming next year!

Terry Shames
I've read a few of her Samuel Craddock mysteries, and really liked them. But then I didn't. I read one that was very difficult, and then the next one didn't appeal to me, so sadly I am finished with the series. I think I am a bit more fragile in my reactions to upsetting books just now, and I am a firm believer in reading just what I want to, what pleases me. I can't always figure out why I like something, but not something else, and really I don't even try. Reading is perhaps the only thing in one's life that is strictly our own choice!

Agatha Christie
I read a couple I hadn't read before, and as always, I was so impressed. She was an incredible writer, and one of those rare cases where the hype is true. She should be popular because she is so very good!

Susan Hill
I had read her two books, Howards End is On the Landing, and Jacob's Room is Full of Books, but had never read The Magic Apple Tree, which I just loved. I'm not interested in her mysteries or ghost stories, but I do love her nonfiction.

Fannie Flagg
I went on a four book spree in November. I had read Standing in the Rainbow in 2003, but it was the second in her Elmwood Springs series, and I decided to read them all in order, including Rainbow again. Well, I couldn't have been a happier reader. She is such a good writer. And this series is tremendous. 1998, 2000, 2006, and 2016 is when she wrote the books. I don't want to give away anything so you can experience the magic yourselves. Really special and unique. I just loved these books.

3. Six Authors I Read Last Year But Not So Far This Year.

In the January through June Six in Six, I mentioned Radha Vatsal, but I did read her second book in the Kitty Weeks series in November and liked it so much.

Jessica Ellicott - her Beryl and Edwina mystery series. I read the first one from my state's downloadable books site. I just checked at Fantastic Fiction and she has written two more, which the state isn't carrying so I guess I shall buy them, and soon. Loved the first one.

Cleo Coyle - I have loved her Coffeehouse mysteries, and got the latest two in the series. I had to quit one part way through because I just couldn't stand the subject matter - internet dating. It was just unbearable to read of people swiping through other people on their screens like choosing paint. I will go on to read the latest in the series.

Jacqueline Winspear - I haven't read the latest Maisie Dobbs yet. I'm balking at paying 12 dollars for a Kindle book. Part of me wants to really splurge and buy the whole series in paperback. I think of doing that with Alexander McCall Smith's Mma Ramotswe series as well. I probably never will but I love thinking of a whole section of my shelves with these books there! I just checked and the state library has it so I put my name on the holds list.

I haven't read any of the old English mysteries authors I read last year - George Bellairs, E.R. Punshon, or Cecil Freeman Gregg.  I'm not sure why. I seem to be on a modern, cozy roll this year, and a newly written historical cozy roll.

4. Six Books From the Past That Led Me Back There

Other than Agatha, my books have been new this second half of the year.

The ones not mentioned in the first six months -

Elmwood Springs by Fannie Flagg
Lady Hardcastle by T.E. Kinsey
Village Library by Elizabeth Spann Craig
English Cottage Garden by H.Y. Hanna
Tender series by H.Y. Hanna
And I suppose one could count Susan Branch's memoirs as a series about her life!

Exactly the same as in the earlier Six in Six post except I did bring a second chair into the kitchen which has become my reading place of choice! 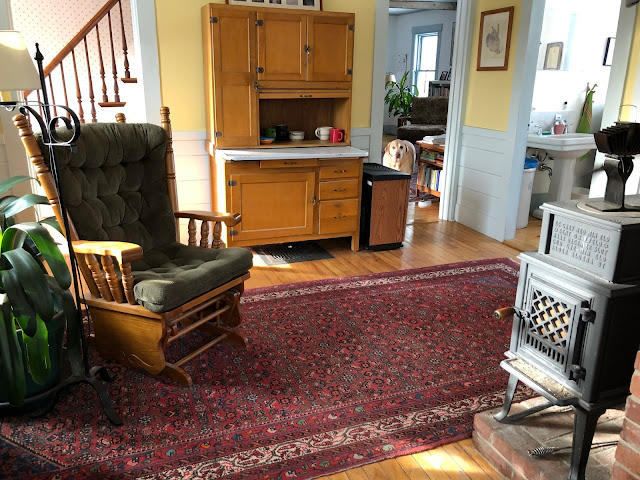 This has taken a while to put together, but I wanted to have some kind of chronicle of my reading this year. One of my New Year's resolutions is to really try and write more about what I'm reading. The little ones are all in school now, and I would like to get back to this. It has been a long time.

Labels: Six in the Second Six