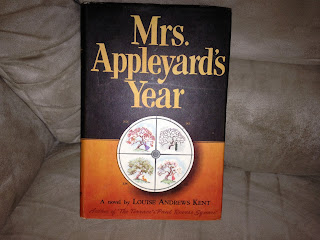 You may have noticed that Mrs. Appleyard hasn't made an appearance here since April. I have thought about the book a few times over the summer, but just didn't have time to sit down with it. At least I thought that was the reason. However, I did read seven print books during those months, so I clearly made a choice to read them instead of Mrs. Appleyard's Year. Today, while Hazel Nina was napping, I thought I would pick it up and read May through August and write a little blog post called 'catching up with Mrs. Appleyard.'

I began the May entry, and I just wasn't interested. I skipped ahead a bit, and I still had the same feeling. I think that what I felt was witty in the earlier chapters became tedious later on - as if the author were trying too hard to be cute. Over the years, I have read and enjoyed a few Mrs. A. books, but this is clearly not one of them, so I'm saying adieu to her and giving the book to a library sale.
Posted by Nan

Labels: A Year with Mrs. Appleyard