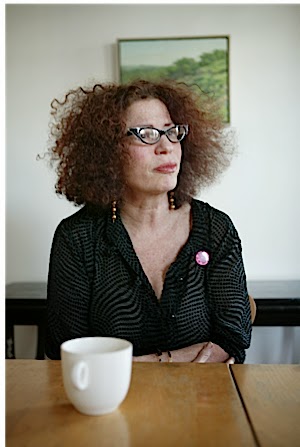 Esther what are you going to do
With all your poems?
Where will you put them?
How Will They All Add Up
What Will They Say When They Do?

When I was a little girl a very little girl
my grandmother lived with us
before my Uncle Alex drove up to our door
then drove her to LA.
We were at 43 Jackson Street
Ansonia Connecticut and then we moved
oddly enough to 43 Holbrook Street
also in Ansonia Connecticut it was not
intentional or unconscious either and my grandmother
I thought she was wise because she was old
she was much younger than I am now
my grandmother said to me
I was around seven you have a lot of poems,
so many poems in your room
you never have to do anything with all those poems
because they are poems.
But now, because of life speeding up
and because I live in New York City
Upper West Side in particular and because
Of Homeland and The Good Wife and Anti-Social Media
and because of books and ebooks and because of ambition
and NPR and the finite nature of life and because I am
a Jew not a Buddhist though I often wish
it were otherwise and because I do not meditate
when my friend
said to me What Will I Do With All These Poems
I said I Will Have a TV show or a podcast
or I will paint them or make a book or two
or turn them into shower curtains or poem wall paper
or make an audible app or maybe I will
just write poems.