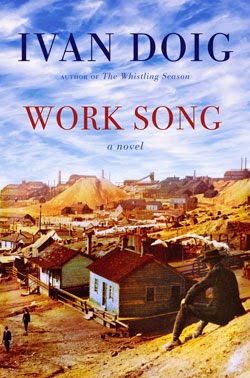 Morrie Morgan, whom we met in The Whistling Season (April Reading) is the center of this book. He has moved to Butte, Montana in the days when the copper industry ruled, and it was a company town. This is a subject I am very interested in - the idea of one industry being the reason a place exists and thrives. The city of 100,000 people is utterly dependent on the miners who work under dangerous conditions. Do the miners strive to better the conditions at the risk of losing their jobs? The age-old dilemma. Morgan gets a job at the library which shouldn't involve him in these problems, but he finds himself in the middle of the action nonetheless. A wonderful, wonderful book. I'm going to buy it, and The Whistling Season, and the latest in the series, Sweet Thunder. And when I've read them, I want to read everything else Ivan Doig has written. He is one of the best authors I've ever read. 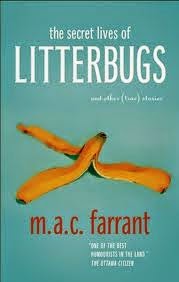 35. The Secret Lives of Litterbugs: and Other (True) Stories
by M.A.C. Farrant
nonfiction essays 2009
Kindle
finished 7/9/14

I do so like Marion Alice Coburn Farrant's writing. I read her My Turquoise Years, and wrote about it here. These essays are of the same ilk - about the family she grew up in which was not a bit ordinary, and her family as a mother. I love her wit, her resilience, her attitude toward life. Someone at 49th Shelf, a resource for Canadian books, described The Secret Lives of Litterbugs -


The pieces are funny and sharp, completely original while describing an utterly familiar world. Combining David Sedaris' self-deprecation and deep sense of the absurd with Erma Bombeck's skewering of domestic life, Farrant has a gift for making those observations that would be harrowing, if they weren't so funny. 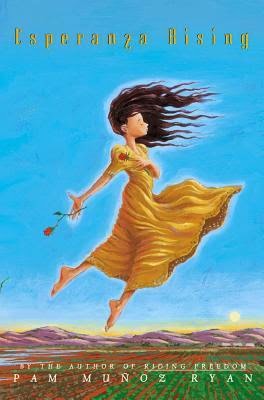 I listened to this book in the very month I began my letters - November 2006. I've not forgotten it, and decided to buy a copy for the Kindle. It was wonderful reading it again. I think it is one of the masterpieces of middle grade/young adult fiction, and it is very timely as our country wrestles with the immigration situation. This is a story of a girl who lived a life of affluence in Mexico, but whose life changes drastically when her father is murdered. His brother offers a life to Esperanza and her mother, but it is not a life they want to live. The only escape is to the US but it is during the Great Depression, and poverty and hostility await them. The details of the new life are so vivid and well-written that the reader can almost feel transported. I love this book and highly recommend it. 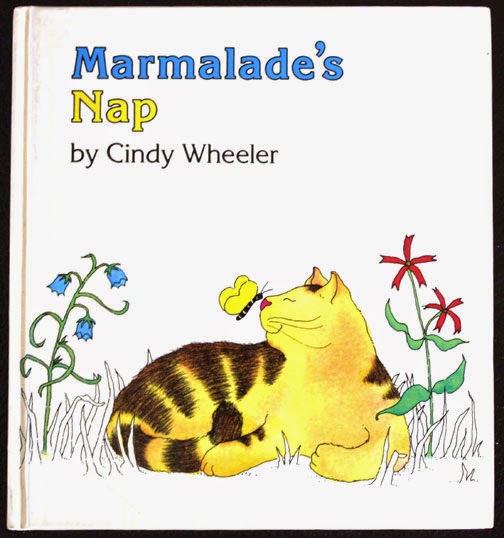 I was going to do this months ago as a 'reading with Hazel Nina' posting, but didn't have a chance, so here she is from July 16 having great fun with this delightful book I used to read to her mum and her uncle. 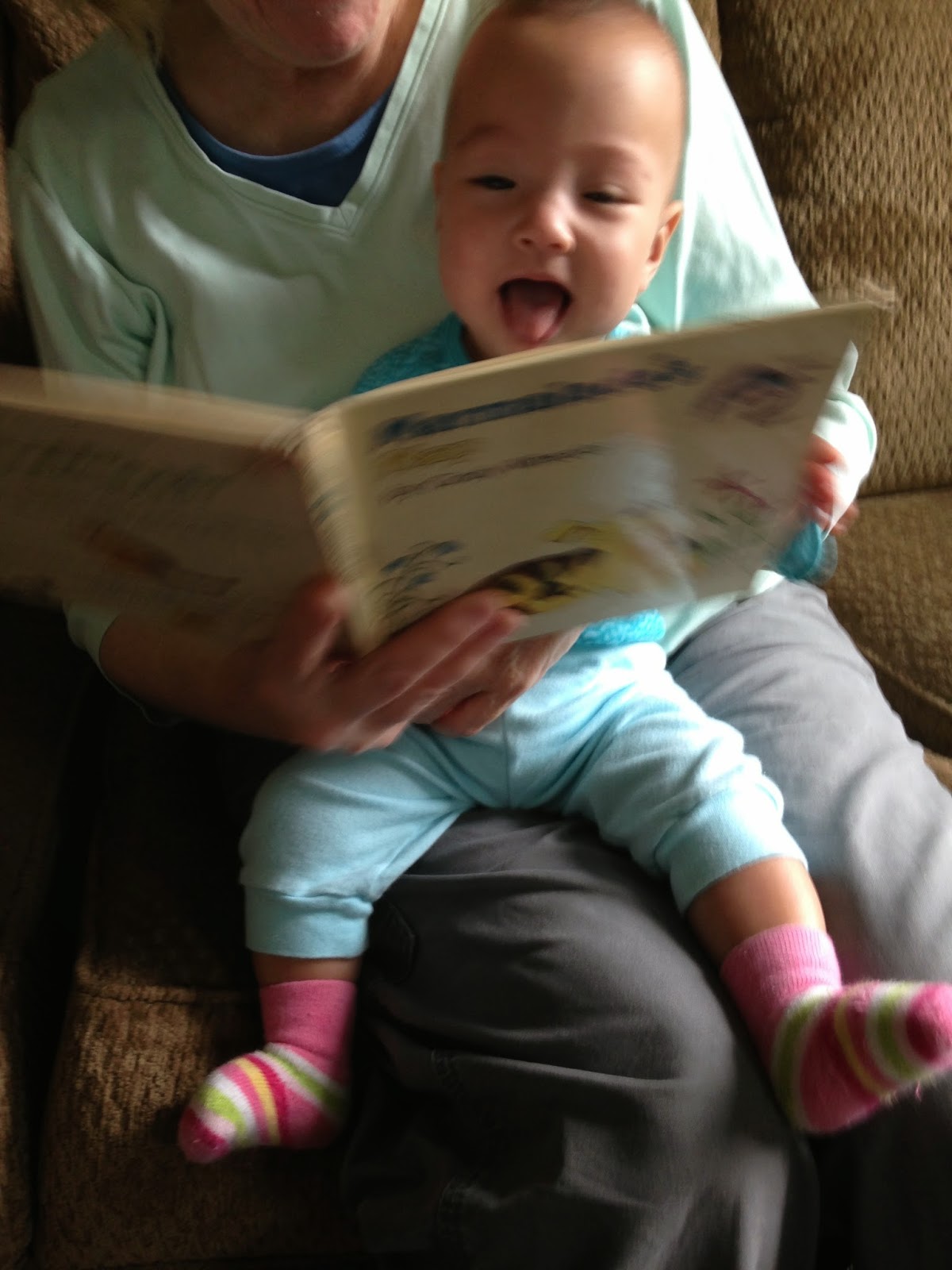 Marmalade walks all around looking for a place to take a nap, and nowhere is satisfactory until the end when he finds the perfect spot. 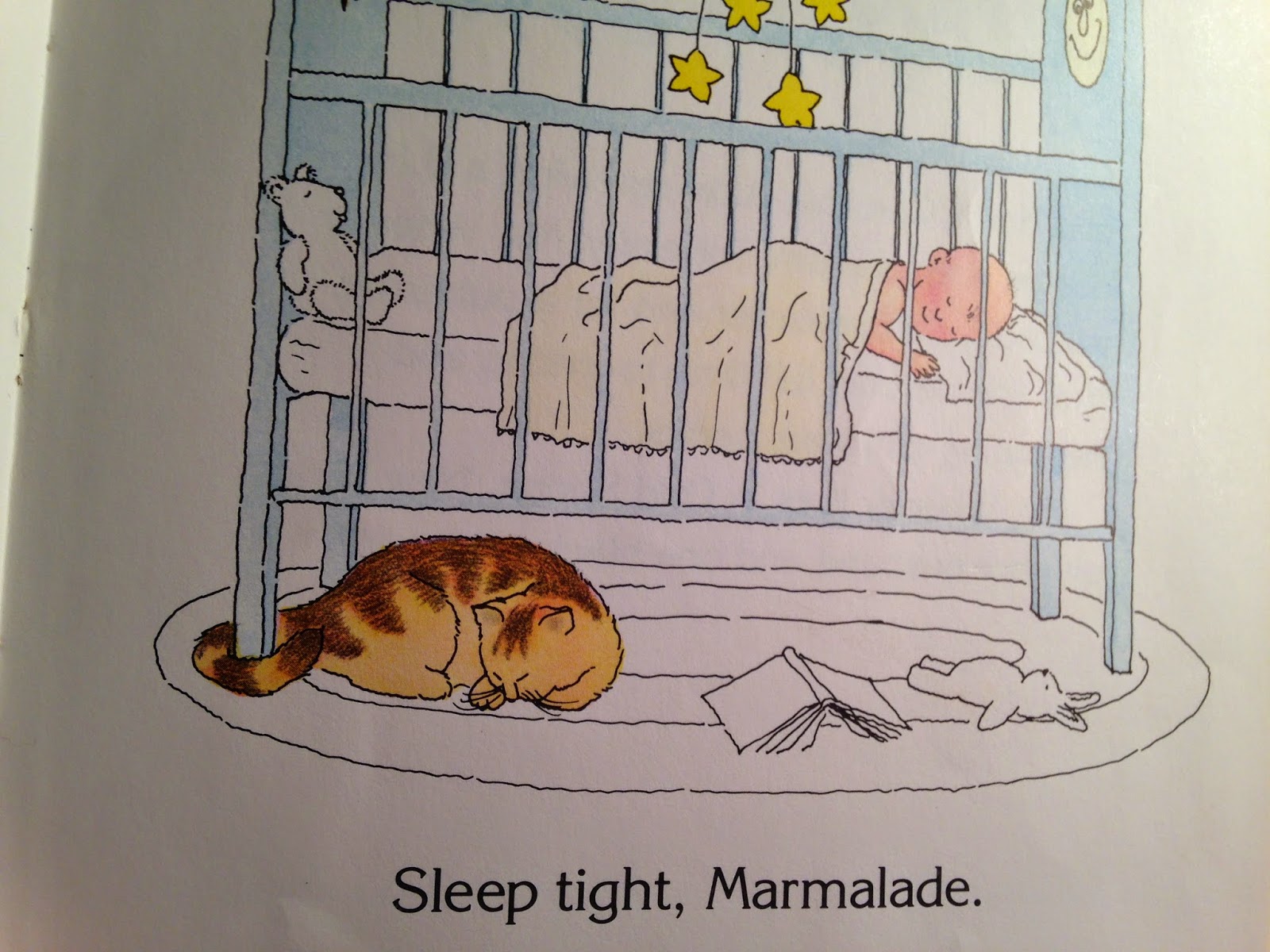 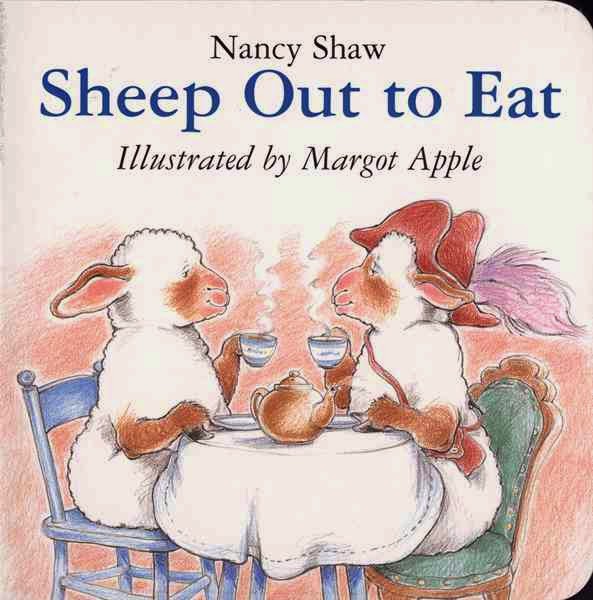 This is one of the funniest books Margaret and I have ever read. We bought all the others in the series, but still think this is the best. Honestly, we laugh out loud every time we read it. These sheepys go to a tea room to eat, and hilarious chaos breaks out. 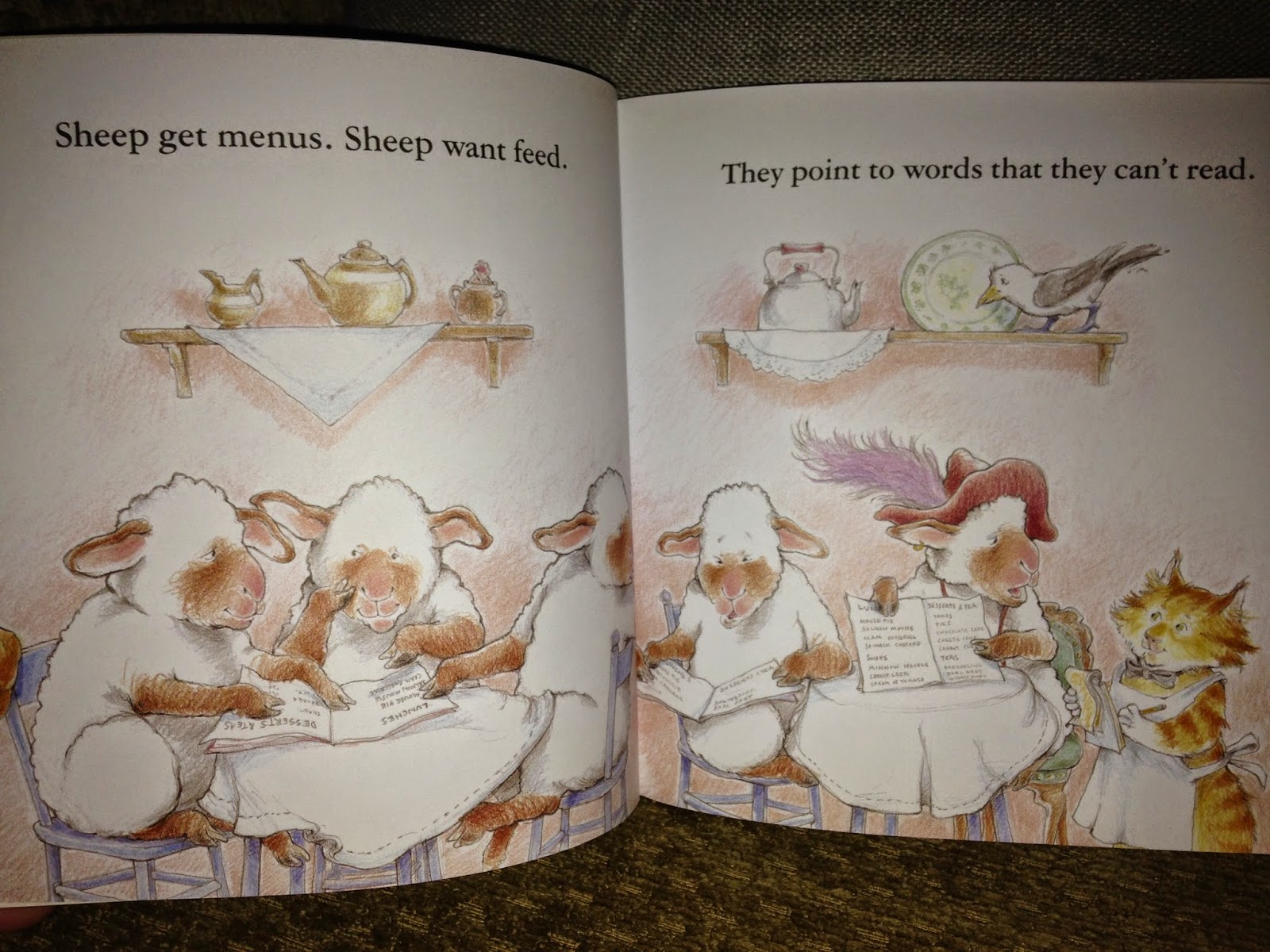 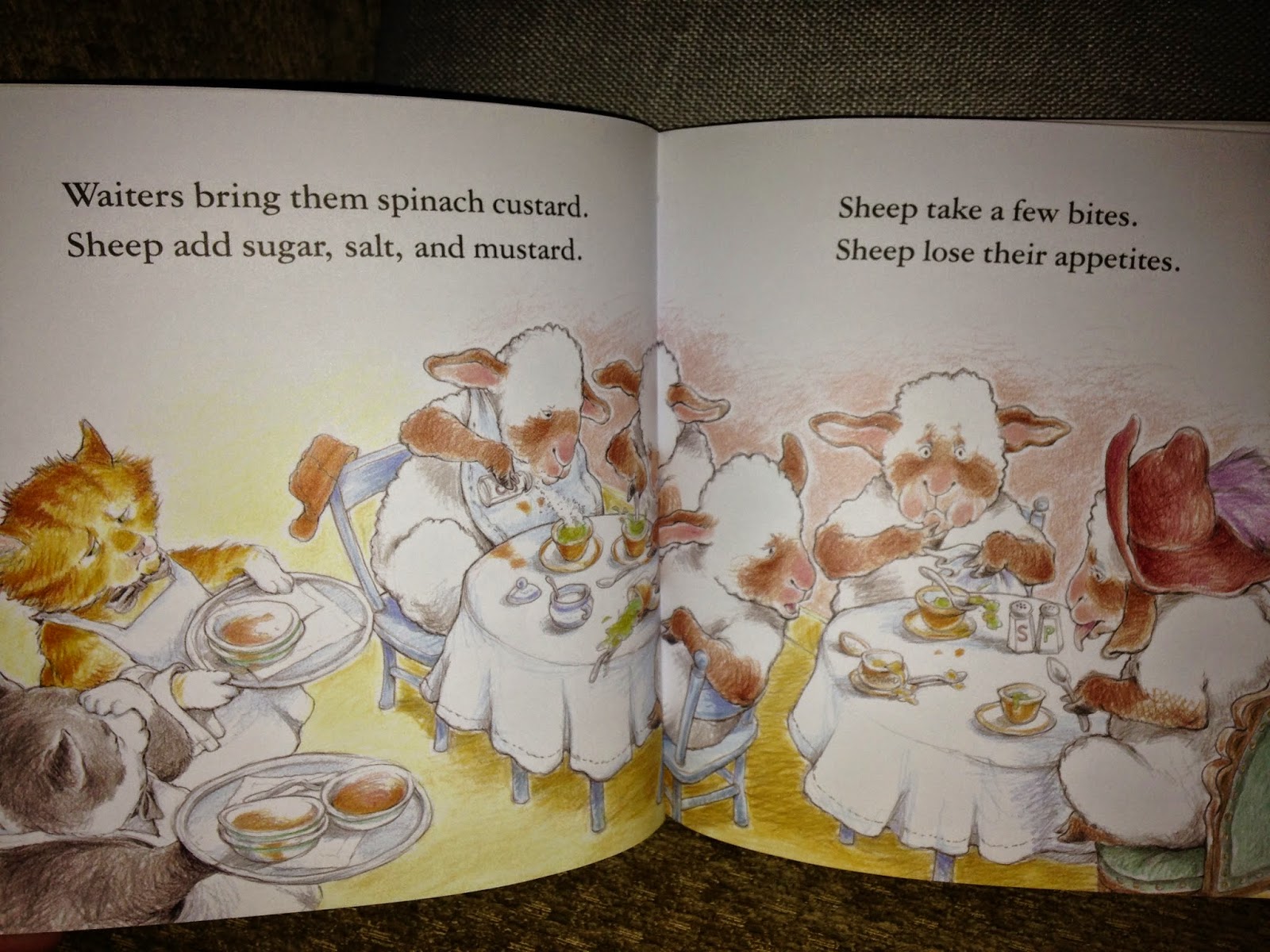 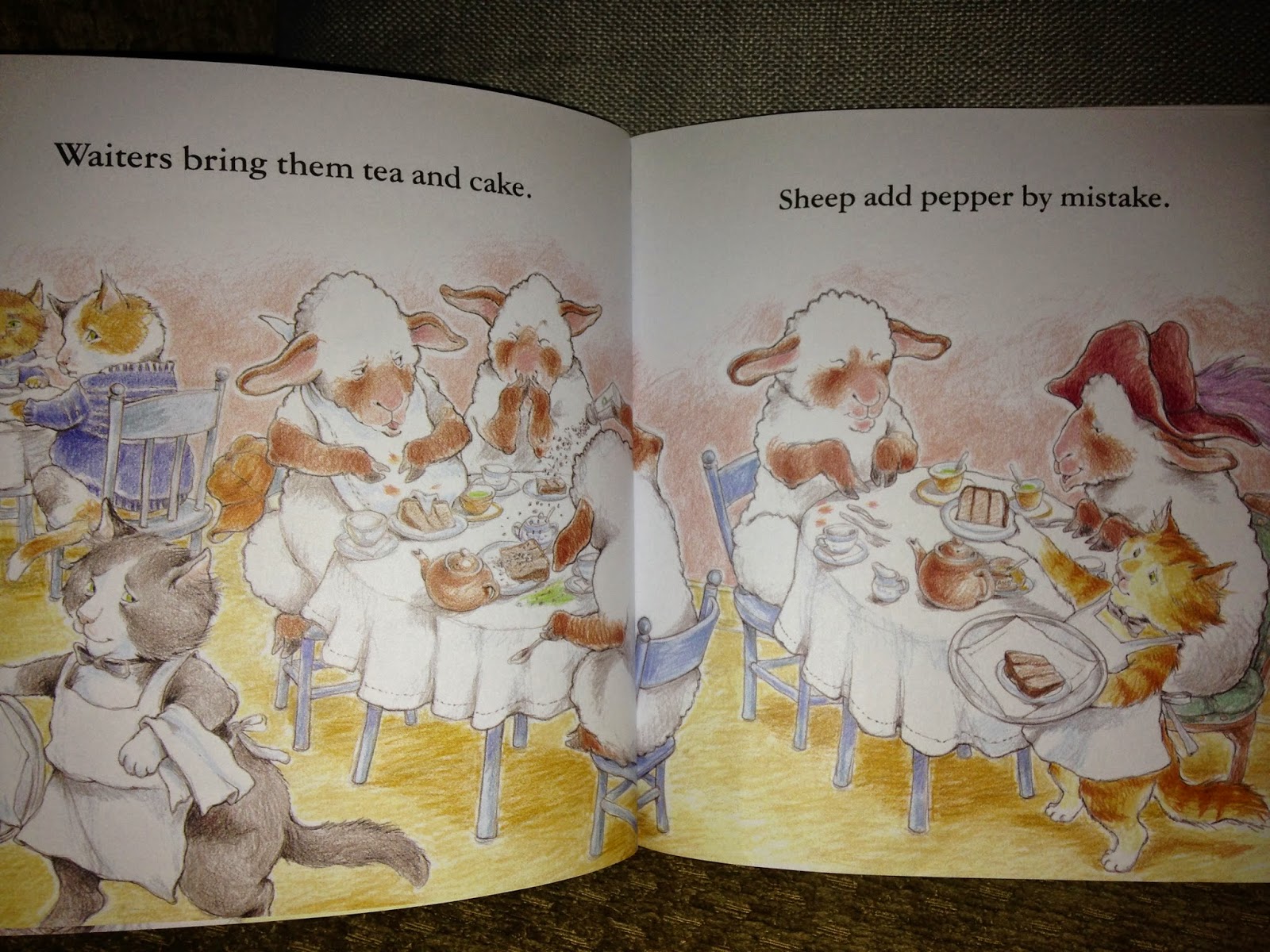 And when they sneeze, their knees hit the table, and food goes everywhere and dishes are broken. When they are finally 'asked' to leave, they go outside and find the exact meal they were hoping for. 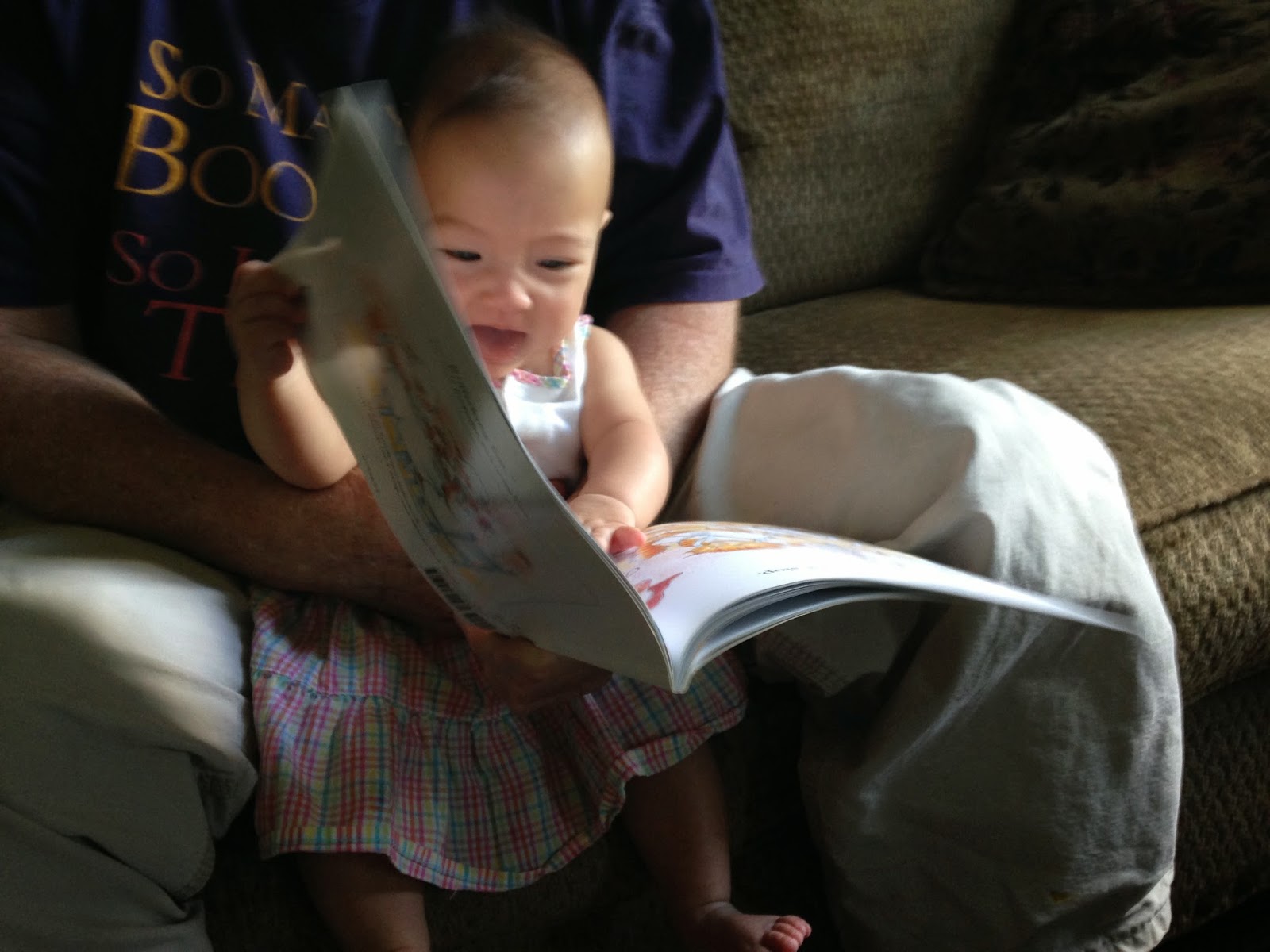 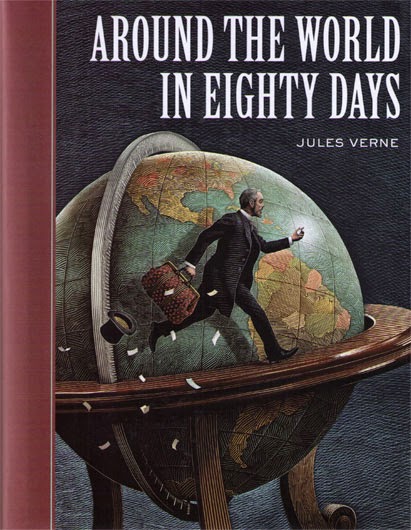 I've heard of this book all my life, but was never interested enough to read it. You'll laugh when I tell you what finally made me buy my own copy and finally read it. The first Kindles had drawings of writers, and I was drawn to the one of Jules Verne, whose picture I had never seen before. He looked intelligent and kind, and I wanted to read what such a man wrote. 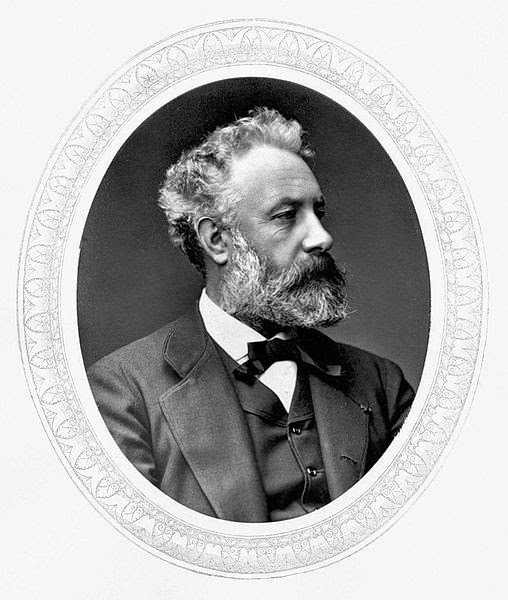 Well, I loved this book. Phileas Fogg makes a bet that he can go around the world in eighty days or less. This is so out of character for this fellow who lives alone and has very regular habits.


He breakfasted and dined at the club, at hours mathematically fixed, in the same room, at the same table, never taking his meals with other members, much less bringing a guest with him; and went home at exactly midnight, only to retire at once to bed.

When the book begins he has just fired his one servant for bringing him his "shaving-water at eighty-four degrees Fahrenheit instead of eighty-six." His new servant is Passepartout who applied for the job in the hope of "living with him a tranquil life."

The settled life goes right out the window as Fogg proceeds to win the bet. Adventure follows adventure. Anyone reading this book when it was first written would have learned a lot about the world outside of their own towns or cities. The duo come upon bananas in India:


They stopped under a clump of bananas, the fruit of which, as healthy as bread and as succulent as cream, was amply partaken of and appreciated.

One of the book's many pleasures is the chapter titles.


In which Passepartout talks rather more, perhaps, than is prudent.

In which Phileas Fogg descends the whole length of the beautiful valley of the Ganges without ever thinking of seeing it.

In which Phileas Fogg engages in a direct struggle with bad fortune.

They are both informative and humorous. The edition I read was published by Sterling, and it is lovely in every way. The illustrations were done especially for this book by Scott McKowen. The paper feels and looks wonderful. It has quickly become one of my treasures, and I hope to read it to Hazel Nina and Campbell Walker when they are older. 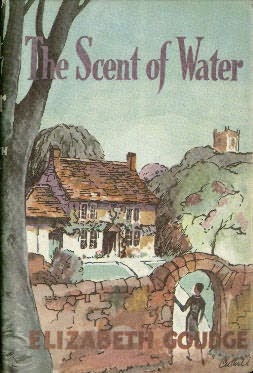 I haven't read any Elizabeth Goudge for about fifteen years. I found that I missed her so bought this book for my Kindle. I completely lost myself in this story. She's one of those writers one is hard-pressed to find now: Elizabeth Cadell, D.E. Stevenson, Miss Read who tell 'plain' good stories. Sometimes I wonder why I read anyone else. There is an excellent webpage devoted to her here. And on that page is a wonderful piece about this book. You may read it here. That will tell you if it is a book you'd enjoy. My blogging friend Clair wrote something six years ago which I kept, and I thought you'd like to read it. It isn't long, and is just so lovely. You may find it here. So, though I haven't told you much about the book, I've offered some sources you may investigate if you think you might be interested. I loved The Scent of Water, as I loved the others I've read by her. I'm happy there are still a whole lot more I have yet to discover.
Posted by Nan