My Turquoise Years by M.A.C. Farrant 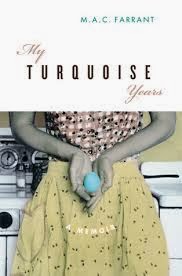 As I think back on my childhood school life in the 1950s-1960s, I remember a few kids who weren’t the 'same,' who didn’t live in families like most of those I knew. I didn’t think much about them being 'different,' but at the same time I didn’t hang out with any of them. There was a boy who lived with his grandmother. I never wondered what had happened to his folks. There was another boy who lived with just his father. He was quite odd, and now would be classified as having some kind of mental problem. He committed suicide in later years. And there were two other boys whose home life was a mystery to me, a mystery I didn’t even try to solve.

If I’d been in the same school with M.A.C. Farrant, she would have been one of those kids. Her father was in her life every other weekend, she lived with her aunt and uncle, and her mother wasn’t in the picture. But people didn’t really know the details, just as I didn’t. And maybe this is why.

At school, in those days, your personal history stayed personal. "It’s none of their bloody business," Elsie [the aunt] would say, turning into an unexpected ally whenever teachers asked probing questions like: "Where is your mother?" "Why do you live with your aunt?"

"Tell them nothing," Elsie instructed. "Or tell them: 'My mother’s on a long vacation. I live with my aunt and uncle. My father visits.' "

I recently read a quote from the late Mavis Gallant:

I had a mother who should not have had children, and it’s as simple as that.

These words could easily have been said by M.A.C. Farrant. The word 'strange' barely begins to describe this woman who was a shadowy presence in her daughter’s life. After not hearing from her mother for years, young Marion received a two-months late, wildly inappropriate birthday present in the mail. It was truly startling to the young girl.

I pulled out a long, purple see-through nightgown that was slit up the front and had black feathers - something Elsie called marabou - attached to the plunging neckline.  … A pair of bikini underpants lay on the turquoise tiled floor. Across the bum, stitched in blue, were the words, "Hi Sexy!"

The feeling I carry with me about this book is one of humor and joy, not depression, gloom, or sadness. How can that be? Well, because some people really don’t dwell on the negative. They don’t whine, they don’t complain, they just live their lives as they come. Nothing really horrible happened to the author but still her mother was dreadful. Not abusive. Definitely neglectful. But you know, the good thing is that she didn’t raise her. Marion had a really strong family upbringing, with traditions, and different personalities, and events, just like anyone else. There are two years covered in the book, the year she was 13, and then four years later. Her mother shows up, but I’ll let you read the book to find out about those visits, except to say that Marion tells her aunt after the second one:

"All she wanted to talk about was her clothes, … "And show me her dresses and jewelry. It was like visiting a stranger. A boring stranger. A boring stranger who’s selfish. I don’t care if I ever see her again." Elsie nodded. "I’ve always said the only person Nancy’s ever loved is herself. You would have had a tough time living with your mother."… for a long while I’d known what was true. That I’d been lucky to escape Nancy. That I’d done the right thing to keep her at arm’s length, pushed away. That her replacement [Aunt Elsie] was so much better.

My Turquoise Years is not your usual memoir. M.A.C. Farrant is clear-headed and unsentimental about her miserable mother. This is a refreshing attitude, one not often expressed in real life or in memoirs - that sometimes we aren’t dealt the best parents and are better off without them; that other people can love us and support us and bring us up to be good, well-adjusted, happy people.

Oh, and the title comes from the color which was ever-present in North American homes during those years, turquoise. The author grew up in British Columbia.

I loved this book, and want to thank my blogging friend Janice for recommending it to me. I’ve also bought a book of Farrant’s essays which I look forward to reading. I like her voice. I like the person.

M.A.C. Farrant’s Facebook page is here, and there’s a great interview with her here.

Addendum March 15 - I almost feel like I should redo the book report because two commenters thought the book sounded more dismal than it is. I put in two quotes about the mother, but honestly the rest of the book shows the pretty much normal, regular childhood. There was humor and joy. I don't read horrible gloomy memoirs. This was anything but.


This is my fifth book for the Canadian Book Challenge.