The Most They Ever Had by Rick Bragg

Addendum: this book report was originally written in 2010, but in 2014 I changed the color on the quotes so they would stand out better, and the whole post came up as being published inn 2014. 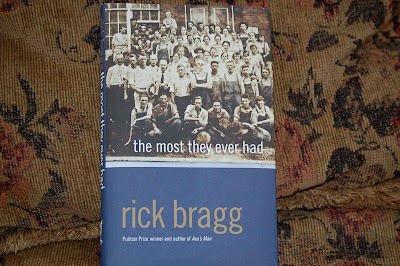 Outsiders like to talk about the working people of the Deep South in clichés, like to say their lives are consumed by football, stock car racing, stump jumping, and a whole lot of violent history. But it is work that defines them. You hear it under every shade tree, at every dinner on the ground, whole conversations about timber cut, post holes dug, transmissions pulled.

I don't live in the Deep South. I live in the far North and I can honestly say this is how it is up here too among the working people. My father didn't have any hobbies. He didn't fish or hunt or bowl. He loved the Red Sox but he lived in the time of day games, so the voice of Curt Gowdy accompanied him as he drove or as he sold cars at his Pontiac garage. When he got together with others, he mostly talked about either his work or those long-suffering Sox. He didn't work with his hands, but he was still a 'working man.' In my life I've known many, many people like him; men and women whose work is the heart of their lives.

Rick Bragg is the chronicler of these people. He is the literary spokesman for a group of people who rarely write about themselves. He shares their stories with both readers who know them, and readers who don't. His first three books were specific in their topics, each of them about a family member. In The Most They Ever Had he writes more generally about the people who worked in the textile mills of the South. He tells us what their working lives were like, and how they felt about those lives being taken away forever with the closing of these mills.

It wasn't the conditions in the mills or the low pay that scared the workers; it was the fear of losing those dangerous, low paying jobs if the mills closed. It is very difficult for those of us on the outside to understand. How does a worker live with this?


The machines snatched the hair from some people's heads, ripped the clothes off bodies, and did worse...

Others perished more slowly, choking on the cotton they breathed in the unventilated, oven-like rooms.

How they bear it, and why they bear it is the story Rick Bragg tells us. As time went on conditions got better.


In time, they worked not just for subsistence, but for one of the best blue collar paychecks in their foothills. The modern-day workers, whose ancestors labored to stave off deprivation, made ten dollars an hour, eleven dollars, more, and bought modest houses, bass boats, and above-ground swimming pools. The mill here, like others around the country, became safer, cleaner, better ventilated. A job that had once carried a social stigma - lintheads, people called them - now carried a rock-solid respectability. And the thing the mill workers never could explain to better-off people was, it always had.

But human dignity, in a global economy, is just one more cost to cut. Long before the economic meltdown of 2008, the age of the textile worker was coming to an end.

In 1991, an American trade journal ran this advertisement:
Rosa Martinez produces apparel for U.S. markets on her sewing machine in El Salvador. You can hire her for thirty-three cents an hour.

As I look around at the tags on various items in my life, I find that my flannel shirt from LL Bean was made in El Salvador; my bathroom towels were made in India and in Turkey; my Reebok shoes were made in China; my car was made in Germany; my Nikon camera was made in Thailand. In my brief survey, the only thing I could find which was made in the USA were my Fiesta Ware dishes.

It didn't used to be like this. Most of our cars were made here. Our cameras were made in Rochester, NY by the Eastman Kodak company. And our cottons, our sheets and towels and underwear were made in the American South, in the mills which Rick Bragg writes about in this book. These workers took pride in what they did with their hands. Not just mill jobs are being lost, but so many 'little' jobs which took human skill and talent. There used to be a shoe repair place in town, but it has sat empty since the owner died because no one wanted to take it over. There used to be seamstresses but I don't believe there are any in the area now. If the zipper breaks, we throw the coat away or use it without zipping it up. If the sole of the shoe wears out, we get new shoes. I've heard there is a lack of plumbers and electricians. What happened to the basic jobs of life? The common, everyday needs that must be met?


"It's got to the point, my brother Sam said, "that the only thing we make in this country is money."

Maggie wrote a terrific review of a book on this subject: Shop Class as Soulcraft.

In his acknowledgements, Rick Bragg says about writing this book:


It began more than seven years ago, and for a slim volume has taken up more work, more time, than anything I have ever done.

Each chapter tells a story of a separate life, though the sufferings they endured do run together across the pages. They are grim in many places and sad in the spaces in between, but when I told that to a friend, worried that no one would stick with such a book cover to cover, he told me not to worry. "Well, it ain't a damn barn dance, is it? It's an American tragedy."

Rick Bragg wanted to get it right. He wanted to be sure he told their stories, and that he gave these people the homage they deserve. I think he succeeded. I've said it before and I'll say it again, Rick Bragg is one of the best writers in the world, past or present or future. And the interesting thing to me is that he writes nonfiction. He brings poetry to truth. This book isn't cheery but it is uplifting. The reader does not feel sorry for these people. Rick Bragg has told their story and given them the dignity they deserve. I don't believe anyone could have done it better.

Another book report on a Rick Bragg book at Letters from a Hill Farm here.
Posted by Nan