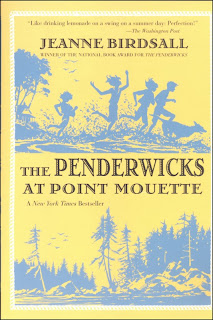 Without giving away the plot in the second book, I’ll just say that Skye, Jane, and Batty go on a vacation to Maine with their aunt Claire, who featured in The Penderwicks on Gardam Street. Much of the book involves the second in age, Skye, being the one in charge because Rosalind, the oldest, is off to New Jersey with her best friend’s family. This is a real trial for her. So many good things happen in this book to further the reader’s delight in the series. 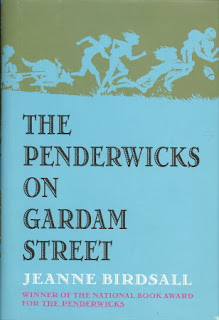 We learn in the first book that Mrs. Penderwick died of cancer soon after the youngest daughter Batty was born. The second book begins with a letter she wrote before her death to Mr. Penderwick’s sister Claire saying she didn’t want her husband to be alone, and that after a few years she wanted him to begin dating. So the sister, whom the girls adore, shows up hell-bent to follow the instructions. After a couple disastrous dates, the girls begin a Save Daddy campaign, and they get him fixed up with really terrible prospects so he won't have to marry again. Meanwhile, he begins talking about a woman he is seeing. We readers know right off that she is a literary device, not a real person. The Penderwicks have new neighbors, a widow and her young son. Batty loves this little boy. I thought this book even more wonderful than the first, probably because I got to know the characters more. This is just the best series!

Addendum: I came upon a wonderful blog post - Ten Things I Love About the Penderwicks. It is here. 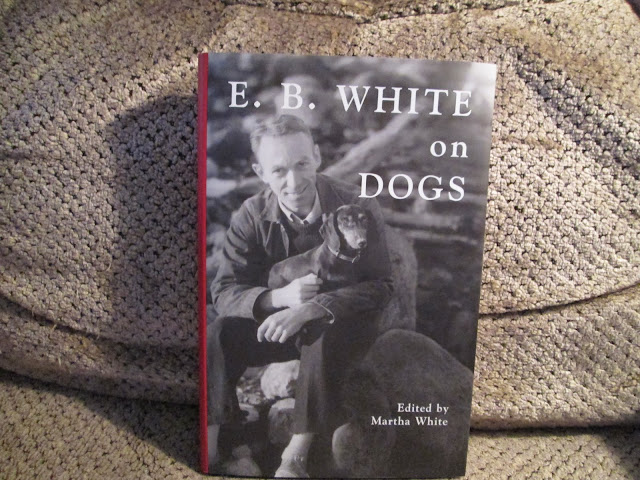 We went with friends to see Martha White on a beautiful September Sunday afternoon at the wonderful Main Street Book Ends in Warner, New Hampshire. She spoke about this new E.B. White collection, and signed books afterwards. She was a delightful storyteller, and such a nice person. I expected I would love the book to pieces, but sadly I didn’t.  There were some articles or letters that mentioned dogs in only a sentence or brief paragraph which I didn’t think were worth including. Possibly a slimmer volume, with a strict focus on White's writings about dogs may have worked better. 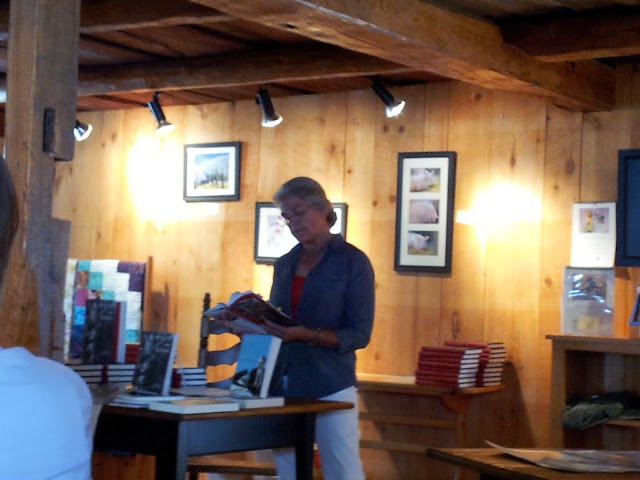 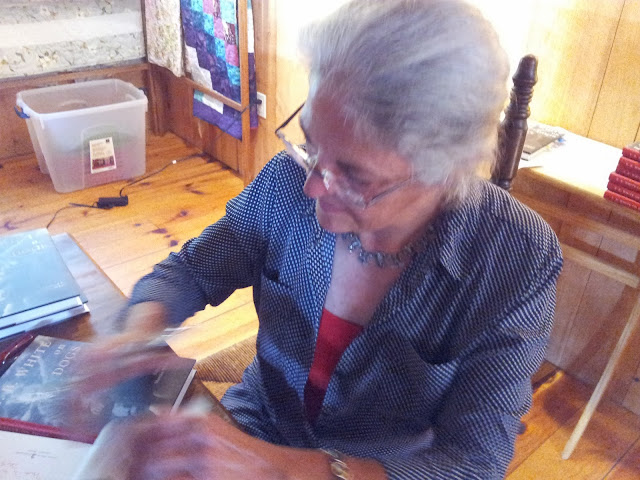 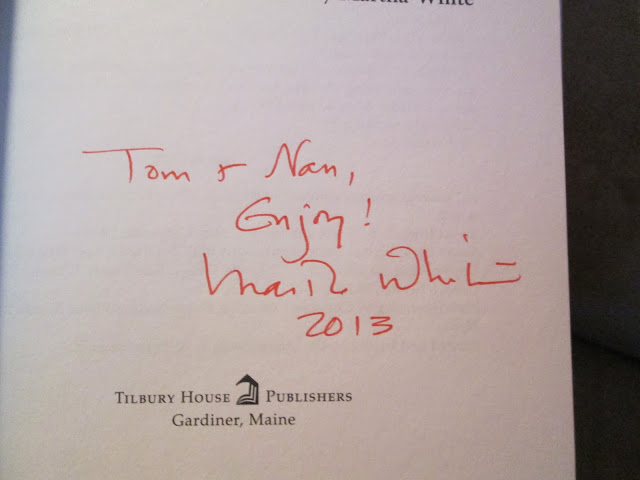 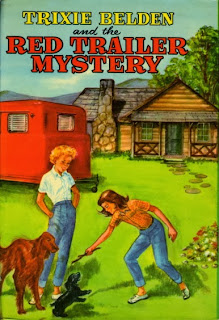 I so enjoyed the first Trixie Belden book, The Secret of the Mansion (June Reading), and because it had a sort of cliffhanger ending, I’ve been eager to read the second book. The Red Trailer Mystery was every bit as good as the first in the series. Very literate. Such good descriptions of the natural world and interiors and people that the reader has no trouble visualizing the scenes.

What strikes me most as I think back on the book is the freedom that the children have. They ride horseback (without helmets), swim in quarries, and wander in the woods with complete adult approval. The parents of Trixie, and in this book the governess of Honey, Trixie’s friend, rarely say ‘be careful’ or ‘don’t do such and such.’ These aren’t kids who are drinking, or using the phone or internet in inappropriate ways. As I said in my book notes of the first book, they ‘really live.’ I don’t know when I’ve read about such an enviable childhood. I want to be there, in those times, in those books. Granted, horrible things could have happened. Trixie falls off the horse, but isn’t injured. Some really bad guys are talking about their crimes while the girls are hiding in the barn loft just above them. I suppose it is all an idyllic world, and maybe it never existed, but it is sure appealing. Honey doesn’t have an easy life, though she is very rich, but Trixie is always optimistic that things will work out, and of course they do. These girls are given the space and freedom to make their own decisions, good or not-so-good, and are the epitome of ‘empowered’ girls. Heady stuff for the late 1940s and 1950s, and indeed, for today. There is nothing they can’t do. We are never presented with a scenario where boys are luckier or more adventurous or more capable.

In this book, the girls go off with Miss Trask the governess in a trailer pulled by the car, in search of Jim, the boy who took off at the end of The Secret of the Mansion. They feel certain he is applying for work at one of the three summer camps upstate from the Hudson Valley where the girls live. They need to find him because of a revelation we learned of in the first book. While parked at Autoville, the tourist trailer campground, they fall into mystery upon mystery, beginning with a red trailer named Robin parked next to them. The Robin is beautiful and expensive, but the family is obviously very poor. They are uncomfortable around Honey and Trixie. Then we find out there are trailers being stolen in the area. They are stripped of all their fittings, and then left. Trixie and Honey become involved and begin their adventures.

Their dogs, Reddy the Irish setter and Bud the cocker spaniel accompany them on the trip and they live as free a life as the girls, running wild in the woods and making their own discoveries.

I am quite surprised at how much I have enjoyed these first two books in the series. I’ve taken a few reading trips back to a couple other older series, Nancy Drew and The Bobbsey Twins, and have been disappointed by each one. Julie Campbell wrote only the first six books, and perhaps after that they aren’t as good, but the writing in books one and two is really very good. The pacing kept me reading far into the night. I cared about the characters. I like these girls. They are kind, interesting, intelligent, and still very much kids. Thirteen-year-olds today may be more knowledgeable about the world, but it seems to me that Trixie and Honey know about the important things in life.

There are dear illustrations in which the personalities of the characters leap right out at the reader. 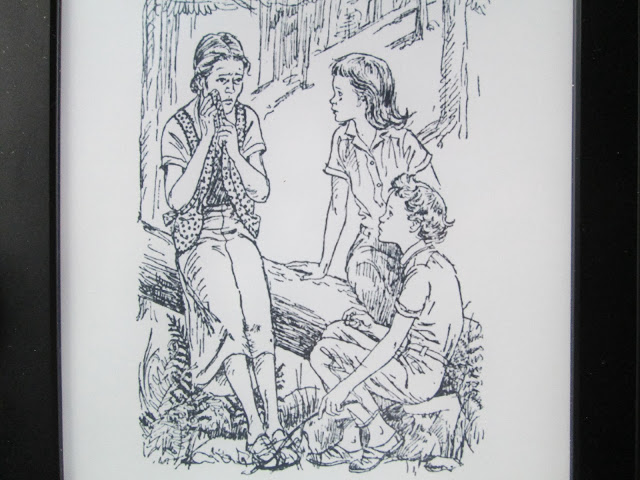 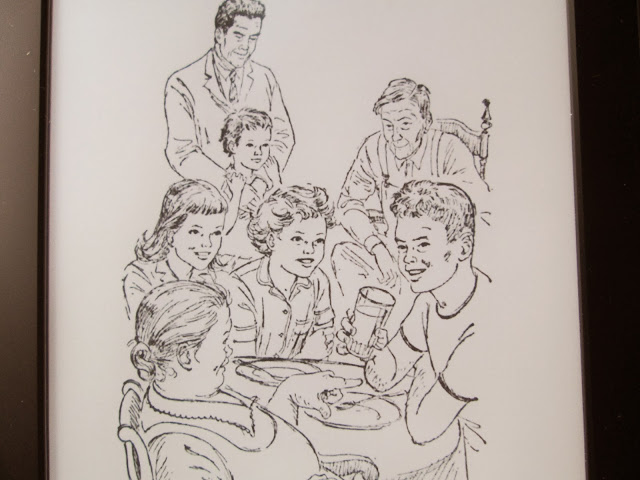 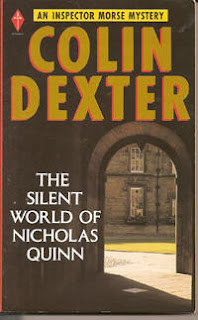 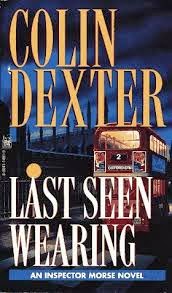 57. The Puzzle of the Silver Persian - book 5 in the Hildegarde Withers series
by Stuart Palmer
mystery, 1934
Kindle book
finished 10/9/13 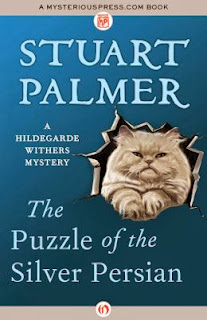 Love, love, love this series. Hildegarde is unlike any female sleuth. I can’t imagine why Miss Marple is so well known, and Hildegarde Withers is not. She is strong, forthright, happy in her life. Rare for a woman in a book written today, let alone those published decades ago. This book begins on-board ship as Hildegarde heads to England on vacation. 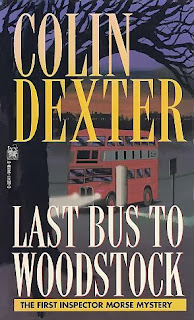 I saw that Amazon was offering the first three Inspector Morse books on the Kindle for $10 and I thought this would be a good chance for me to make the acquaintance of characters I’ve known only from television. I think that Inspector Morse, Lewis, and Endeavour are some of the very best television ever done. The late, sorely-missed John Thaw made Morse his own. And then some brilliant people decided to make a series starring Morse’s sergeant Lewis taking over after Morse’s death. And then some more brilliant people decided to go back to Morse’s beginnings as a policeman. Endeavour is Morse’s first name.

So, with all this wonderful television background, I proceeded to begin the books. They are quite different from the programs, which I think is good. The personalities of Morse and Lewis are somewhat different, as is their relationship. I could jump right into the stories as if these were new characters to me. I found each book excellent. The whole town and gown thing is fascinating - how they are separate and yet how they come together.