Today's poem by Mary Oliver, on the occasion of her birthday

Since hearing of Mary Oliver's health troubles, I have found it very difficult to find updates. But today, on her 77th birthday I was so happy to see this: 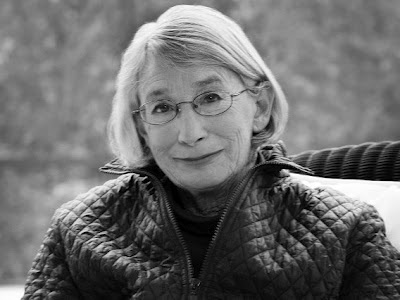 Recipient of the Pulitzer Prize, the National Book Award, and a Guggenheim Fellowship, Mary Oliver is one of America’s most esteemed and beloved poets. Her poems, with their deep connection to nature, are renowned for their evocative and precise imagery, transforming the everyday world into a place of magic and discovery. Throughout her celebrated career, she has published more than 20 books of poetry, including American Primitive and New and Selected Poems, Volume One, and taught at many colleges and universities around the country, inspiring generations of younger writers.

Join us for an evening with one of America’s foremost poets as she reads and discusses her work including her latest book of poems, A Thousand Mornings, releasing October 11, 2012.


And now for a poem to celebrate!

Just Around the House, Early in the Morning

Though I have been scorned for it,
let me never be afraid to use the word beautiful.
For within is the shining leaf
and the blossoms of the geranium at the window.
And the eyes of the happy puppy as he wakes.
The colors of the old and beloved afghan lying
by itself, on the couch, in the morning sun.
The hummingbird's nest perched now in a
corner of the bookshelf, in front of so many
books of so many colors.
The two poached eggs. The buttered toast.
The ream of brand-new paper just opened,
white as a block of snow.
The typewriter humming, ready to go.