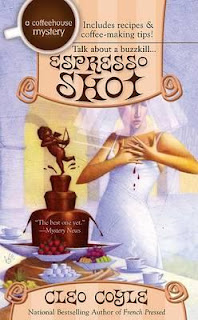 
In this book, Clare Cosi's ex-husband, the charming bad boy Matteo, is about to get married to a glamorous woman, Breanne Summour. When a young woman who looks very much like her is shot, the possibility looms that Breanne may have been the target.

I have included all these Coffeehouse Mysteries as entries in the 2011 and 2012 Foodies Challenges, because there is always so much coffee info. In this one, the reader learns recipes for espressos. A 'mochaccino' is


two steaming shots of espresso stirred into a base of my [Clare] homemade chocolate syrup, a pour of steamed milk, plenty of frothy foam, and a whipped cream cloud as high as Denali. … dusted with bittersweet shavings.

Just as in each of the other books in this series, I learned something new. This time it was about espressos, but also underground restaurants. Maybe those of you who are cosmopolitan city-dwellers know all about this phenomenon, but it was all new to me. They are 'quite clandestine' and 'quite illegal.' First of all, you must be invited. Clare and a food writer travel to the 'Friends Meeting House on Northern Boulevard' in Flushing. Someone approaches them and takes them to the 'secret location.' Clare asks,


"if these restaurants are underground, how do you even find out about them?"
"Oh, there are lots of ways. Foodie networking mostly; chefs and friends of chefs; amateur reviewers; and of course, the local blogs. If you throw a little money around, waitstaffs will usually clue you in on their neighborhoods' culinary secrets."


"A hot young chef named Moon Pac wants to open a restaurant and needs financial backers. If he dazzles the right people, he might get his sugar daddy, so he's been throwing this dinner once a week for the last two months. I was invited by e-mail. Other influential New York foodies and restauranteurs received the same invitation."

Fascinating. These sorts of details about the different aspects and areas of New York City keep each book fresh and interesting to the reader. Of course, there is always a murder or two. There are always Clare's personal relationships with family and friends. And each book has food and coffee info. Espresso Shot offers a particularly gross bit about a coffee called Kopi Luwak. Want to hear it? Sure you do. Well...


"kopi is the Indonesian word for "coffee," and luwak referred to the small catlike animal from which the coffee beans were collected. … The luwak is a feral, forest animal. It eats coffee cherries and voids them whole. The Indonesian farmers collect them, process them, and sell them as the most expensive coffee on earth: Kopi Luwak." 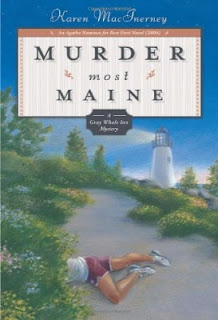 For an innkeeper who loves to bake delicious breakfast foods, can you imagine anything worse than hosting a group of dieters?! That's what happens in this third installment of the Gray Whale Inn mysteries, set on Cranberry Island in Maine. It is now the second May Natalie Barnes has lived in Maine, where she runs the Gray Whale Inn. She left her home in Texas and settled here in a much different climate. It is fun for this New Englander to read of the differences in Nat's new locale and her old one. She still can't get used to the cold. She marvels that in May 'flower buds were just starting to appear on the hillsides of Cranberry Island' while in Austin, 'the bluebonnets had carpeted the hillsides two months ago.' I'll tell you that is a marvel for me to read. We still have snow in March!

The Inn is hosting the 'Lose-It-All Weight Loss' retreat. For the first time, Natalie will be offering three meals a day. She will still bake some goodies for the store which her friend Charlene runs, but for the time the dieters are there, everything she cooks is low-calorie and no-butter. I've mentioned that the first two books had great recipes, and this one continues giving recipes for foods mentioned in the book, only this time they are predominanly main meals.

The upsetting thing about this group is that the leader is a former summer visitor to the island, and Natalie's boyfriend John was in love with her for one of those summers; and not just John but apparently many other young men. When Natalie sees them together, and also notes that John is spending a lot of time with Vanessa, she feels nervous about their relationship. Vanessa runs the group with a man who acts as a personal trainer for the participants, but he also dishes out pills, which are supposedly herbal supplements. Soon this man is dead, a victim of his own 'herbs.' And so the reader is off on another adventure with Natalie, an intelligent, spunky, kind, and likeable character.

I am so fond of this series, and I hope it goes on and on. The ending to this one is particularly satisfying to the reader.

I read both of these books for the Foodies Read 2 Challenge 2012.