The Cornbread Book by Jeremy Jackson 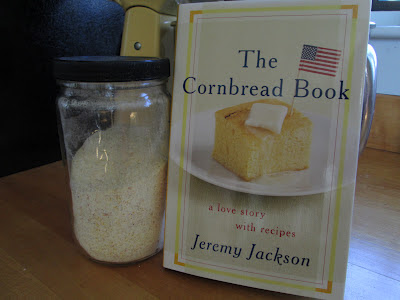 50. The Cornbread Book
a love story with recipes
by Jeremy Jackson
cookbook, 2003
fourteenth book for the Foodies Read 2 Challenge 2012
finished 9/25/12

When there are so many cookbooks out there, you may wonder why you should buy one that is so specialized. Why do you need recipes that are all about cornmeal? And I say, because this is one of the most entertaining, cheerful, and witty books about food I've read. And we all welcome a little more cheer and wit into our lives, don't we? To say nothing of the cornbread! This man loves cornbread.

One of Jeremy Jackson's goals is to make cornbread one word. Perhaps nine years ago, when this book was published it was written corn bread, but according to my online dictionary which encompasses:

it is definitely one word.

His other goals are to


have cornbread named the official bread of the United States of America. …
to find a wife.

As far as I know the first one has not come into being but according to his fun blog, he is now married!

The book starts off with historical information about cornbread, told in a humorous, understandable, and interesting way. We learn that Henry David Thoreau 'saw it as a means toward a more self-reliant life.'


Every New Englander might easily raise all his own breadstuffs in this land of rye and Indian corn, and not depend on distant and fluctuating markets for them. Yet so far are we from simplicity and independence that, in Concord, fresh and sweet meal is rarely sold in shops . . . For the most part the farmer gives to his cattle and hogs the grain of his own producing, and buys flour, which is at least no more wholesome, at a great cost, at the store.

Later, the author tells about the difference between degerminated cornmeal and whole-grain cornmeal. He's no cornmeal snob. He uses both. While the whole-grain is more nutritious, as you might imagine, it does spoil if not kept cold.


I would never buy whole-grain cornmeal that is more than two months old. I much prefer to buy it earlier that that. (If you're inclined to mill your own corn at home with a hand mill or electric mill, you'll get the freshest cornmeal of all.) And when I get whole-grain cornmeal home, I put it in an airtight bag in the freezer immediately. Frozen, it lasts for months.

Mine comes from Butterworks Farm, and I'm quite sure it is fresh when I buy it. I just need to pop it in the freezer when I get it home. It does indeed look just like Jeremy Jackson describes it. 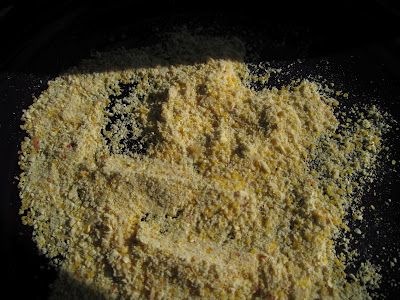 He offers a list of places where you can obtain 'the real thing.'

He is also no cornmeal snob when it comes to northern and southern cornbread. He is concerned that


The continued "Balkanization" of cornbreads has perhaps placed too much emphasis on the idea that certain cornbreads are or aren't "authentic." Any cornbread that has corn in it is authentic, as far as I'm concerned. And though southern cuisine still celebrates cornbread more than any other region, even southerners are consumed by the idea that only white cornmeal can make "real" cornbread. Meanwhile, most people seem to get their cornbread recipe off the back of the Quaker cornmeal box (even Julia Child admits as much) or out of the Jiffy box.

There are many recipes I want to try, such as Portuguese Cornbread (Broa), Summer Kitchen Pound Cake, Berry Patch Cobbler, and Popcorn White Loaf. Yes, popcorn.


World War II saw another revival of cornmeal cookery, including the remarkable use of "popcorn flour" in breads. When President Truman ordered bakers to use less wheat flour, the H. Piper Company, then a major retail bakery in Chicago, sought alternatives and found that popped popcorn that was milled into a "flour" was an excellent way to stretch their wheat flour supply. In fact, many people thought that the combination of 25 percent popcorn flour and 75 percent wheat flour created a bread that was superior to one made with wheat flour alone.

The author gives instructions on how to make this flour. It is quick and easy.

For today, I made the simple and delicious Buttermilk Cornbread to go with tonight's Bean, Lentil, and Grains Stew.

This moist, full-flavored, buttermilk-based cornbread is similar in nature and spirit to many of the favorite cornbreads of the South, which are usually made with white cornmeal. Often they don't contain any sugar.

1. Preheat your oven all the way to 450ºF.
When it's reached that temperature, put the 1 tablespoon canola oil into a 9 x 9-inch baking pan or 10 1/2-inch iron skillet and put the pan/skillet into the oven to heat.

4. Bake the cornbread for 18 to 26 minutes, until it's lightly browned.
Serve hot.

I used the cast iron skillet. This cornbread is wonderful, wonderful. I wish you could taste it, but you can if you buy The Cornbread Book! 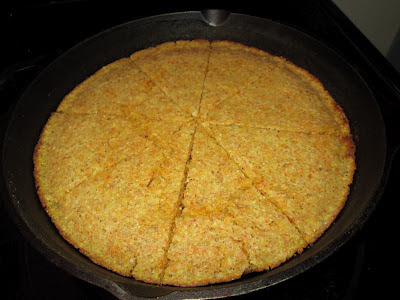 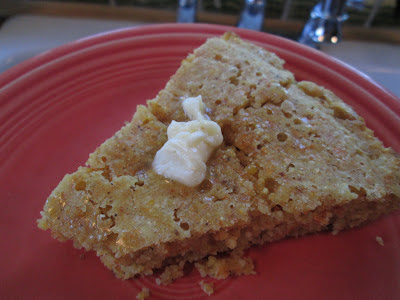 This is another book for the Foodies Read 2 Challenge 2012.