Over the years that we have lived at Windy Poplars Farm, we've had a few different clotheslines. The first was a short line from the end of the house to a pole in the ground. When I think of it now, I see little toddler clothes and our dog Lucy running underneath it. The second one was a pulley going from our old shed, now long gone, out back to the telephone pole. Then we tried lines between the maples out front, but they were too long and often blew down low to the ground in our strong winds. We tried putting one on the porch but it was too shady. And then a few years ago, we settled on the 'umbrella' type. It worked okay, but it wasn't easy to hang the big comforter cover, and I didn't like the way the lines were so close together. In terms of the spot it was in - it made the yard off the kitchen too crowded. It wasn't easy to walk in that area with daylilies on one side and the picket fence on the other. So, for a while now, I've been wanting a different kind of clothesline in a different place.

Where best to see pictures? Pinterest, of course! You must know what this is, right? I'm not on Facebook, so I can't be a member of Pinterest, but I can still search and look at all the wonderful photographs. As soon as I saw this 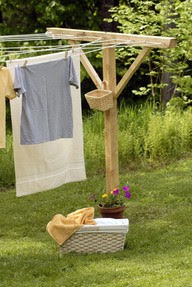 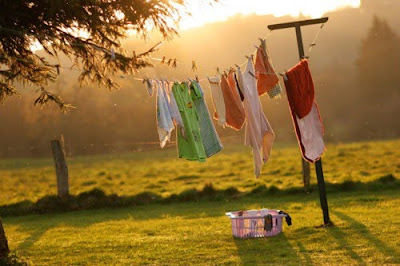 I knew just what I wanted in a clothesline. So yesterday, on the first Saturday of Tom's April vacation he built a new one. We put it a little further away from the house, down next to the north pasture fence. It's a lovely little spot with an old Snow apple tree and a tumbledown stone wall nearby. I like walking out to it - past the vegetable garden, down a path between an old honeysuckle bush and a lilac. It is in a spot where the sun lingers late into the day, and I will be able to see the sunset as I take down the clothes (west is left of the clothesline). I am so very pleased. 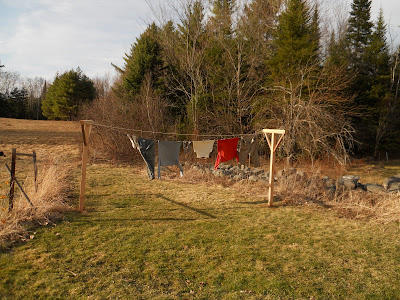 To give you an idea of the old and new locations, I took these pictures from the kitchen steps. 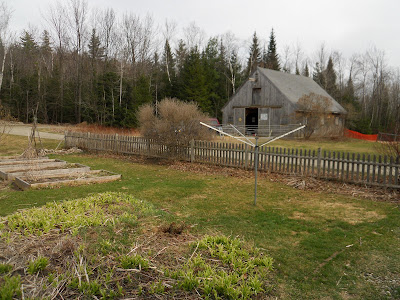 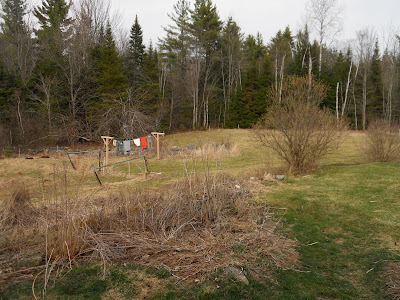 I'll end with a poem about hanging clothes. If anyone knows who wrote it, please let me know.

A clothesline was a news forecast, to neighbors passing by.
There were no secrets you could keep when clothes were hung to dry.
It also was a friendly link, for neighbors always knew
If company had stopped on by to spend a night or two.
For then you’d see the “fancy” sheets and towels upon the line.
You’d see the “company tablecloth” with intricate design.
The line announced a baby’s birth, from folks who lived inside
As brand-new infant clothes were hung, so carefully with pride!
The ages of the children could so readily be known;
By watching how the sizes changed, you’d know how much they’d grown!
It also told when illness struck, as extra sheets were hung;
Then nightclothes, and a bathrobe, too haphazardly were strung.
It also said, “Gone on vacation now,” when lines hung limp and bare.
It told, “We’re back!” when full lines sagged with not an inch to spare!
New folks in town were scorned upon, if wash was dingy and gray,
As neighbors carefully raised their brows, and looked the other way…
But clotheslines now are of the past, for dryers make work much less.
Now what goes on inside a home is anybody’s guess!
I really miss that way of life - it was a friendly sign;
When neighbors knew each other best by what hung on the line.
Posted by Nan