I haven't written a farm and garden report for ten months. Ten months! I don't know what happened. Why didn't I write in July and August and September? There are a few postings under the 'farm and garden' label but I guess there just wasn't enough in them to call them a 'report.' I do know it was a very dry July, with rain only one day. The daylilies came and went post-haste (I've always wanted to use that in a sentence!). We did get a lot of vegetables from the garden.

Unlike the ducky in the blog header, we are having a bit of a dry spell just now. There have been some grass fires in nearby towns. It is supposed to rain this weekend. These days of Tom's vacation week have been just perfect for gardening. Sunny, warmish, breezy.

Last year he put in a new raised bed on the other side of the fence from the patio. It turned out to be too shady for most vegetables so this year it is to be solely for lettuce. 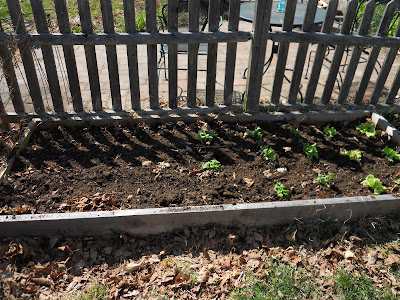 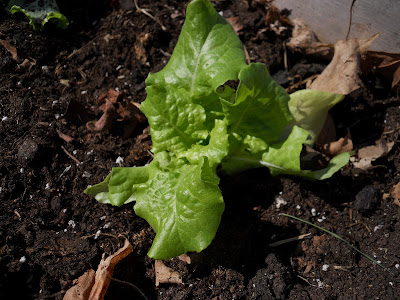 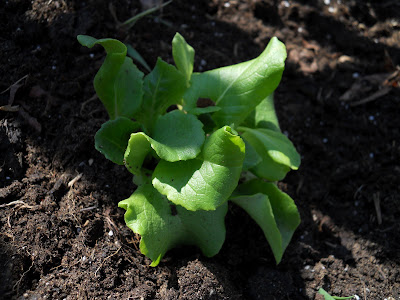 which we started from seed under the lights a few weeks ago. 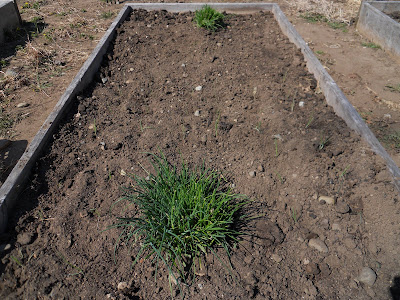 Today I popped in the little Egyptian Walking Onions in that same bed. These are fascinating little perennials which you may read about here. This afternoon I'll plant the Green Arrow Peas, and that will be it until the danger of a hard frost is past on Memorial Day.

Our sheep shearer Katie came yesterday. I've written a few letters about this annual event: in 2007, in 2010, and last year. She is a joy, as always, but this visit included a sad surprise. Tom had led the sheep into a large stall three hours before she came. The goats go in too because Katie trims their hooves. When she arrived and walked into that stall, one of the goats, Bracelet, lay there dead. She had been quiet for a while and not as eager to eat but still it was a shock to find her there. Tom moved her out of the stall during the shearing and buried her later. He has buried a lot of animals in the thirty-one years we've lived here. He always does the job alone with his thoughts, and may sometime share those thoughts on the blog.

The daffodils, bloodroot, and panolas are in blossom. Those panolas! Do you know what they are? They are a hybrid between pansies and violas. Their faces are in between them in size, but they definitely take after the viola side of the family when it comes to spreading. Around here pansies are an annual you buy at the store, while violas or their other name, which I love, 'johnny jump-ups,' pop up literally everywhere. And the panolas are even more hardy and prolific. Tom's mother gave me some and I planted them in one of the raised beds. They practically took it over. We dug them up in the fall to make room for more vegetables in that bed, and now they have self-seeded in nearby beds and in the garden paths. 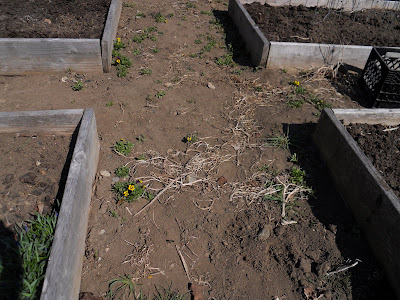 I'm not complaining. They are beautiful and cheery wherever they choose to appear. 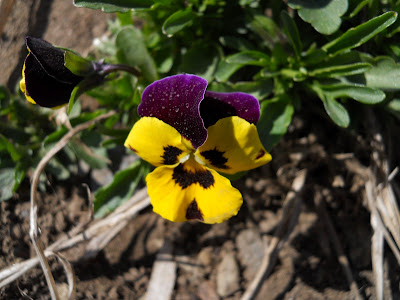 The adorable little grape hyacinths (Bucket!) are up, 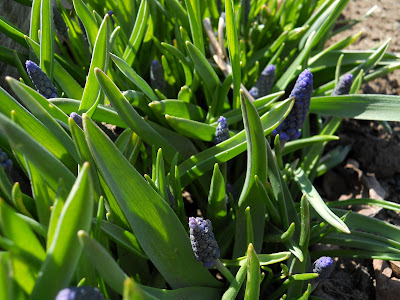 along with the scillas. 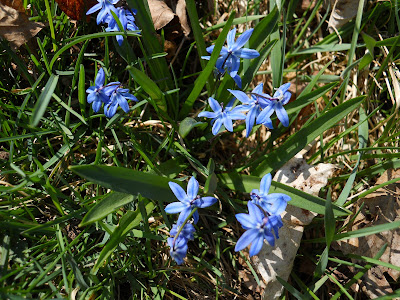 I got these bulbs six years ago from that wonderful purveyor of heirloom flowers, Old House Gardens. All the other flowers are up and growing but blossoms are a ways off yet.

We transplanted the rhododendron we bought last year. It was in the middle of the lawn and we feared it getting too big for that space so we put it in a corner out by the new clothesline. It is just to the left of the old stone wall. (you may click to see it better) 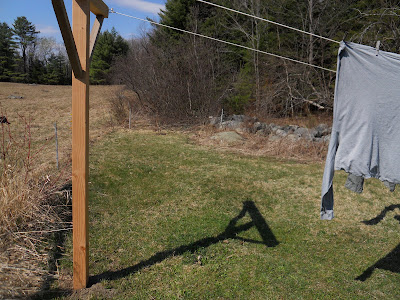 It looks a little sorry just now but those buds promise new life this spring. 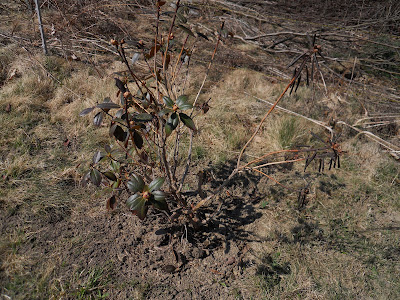 For years now I've been posting pictures of the daffodils which grew in front of an old stone planter which was here when we bought the place. I bet we've tried four or five different things inside the planter over the years and nothing has worked. It made the corner crowded and so this year Tom took it down. Now the daffodils have a little space where they may spread. 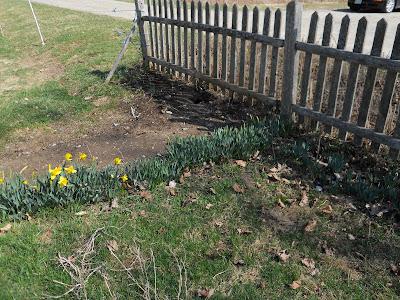 We have a second daffodil area just across the road, amongst some lilacs. 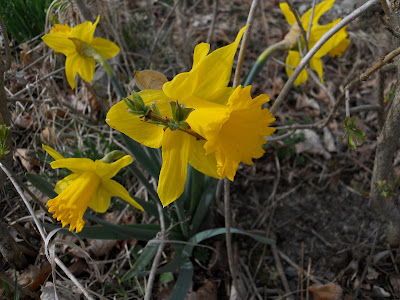 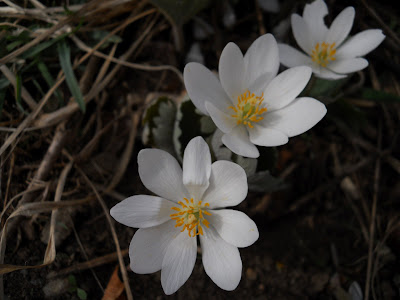 and a clump of chives. The flowers will be gone by when the lilacs come out, and the chives grow just fine there all summer. This isn't a good photo, but it will give you an idea. I love this area. 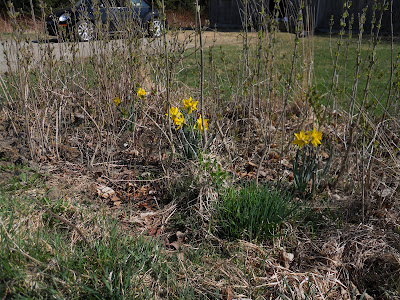 Speaking of photos, I am increasingly unhappy with mine. I have read that my particular camera, with which I was so happy at first, may take blurry pictures as time goes on. I find I'm taking fewer and fewer photographs. I am open to any and all suggestions you may offer on a small but effective camera. Though I hate to buy another one, I really do miss good, clear pictures.
Posted by Nan