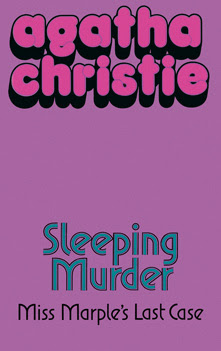 This was published posthumously, and is referred to as 'Miss Marple's Last Case,' though happily for the reader she is not infirm, nor does she die. In fact, I thought her more sensitive, and sharper than I've seen her before.

The beginning of the book is rather like one of those movies that starts off bright and sunny, when quite suddenly a feeling of unease creeps in. Though it doesn't get as scary and bizarre, I was reminded a bit of Rosemary's Baby in the first section. Gwenda and Giles have just gotten married in New Zealand. Gwenda has come to England to find them a house, while Giles will come later. She finds the ideal home. She feels completely comfortable, and though it needs some work, it is the perfect place. One of the areas that needs work is the garden path. The steps and walkway off it are in the wrong place. Instead of approaching the sea view directly, it is off to the side. Where the center walk should be there is a bramble of bushes. Odd, but not startling.

When Gwenda wants to go from one room to the other, she gets up from her seat and without thinking heads right toward a wall rather than a less conveniently placed door. After this happens a few times, she tells the workmen to cut a hole in that wall since it is clearly the place a door should be. When they get working, they tell her the door used to be there.

She has a specific wallpaper in mind for a bedroom, poppies and cornflowers. When a painted-in closet is opened up, she finds that exact wallpaper on the interior wall.

So, the reader begins to get little shivers. What on earth is going on here? One evening she is invited up to London by the Wests, Miss Marple's nephew Raymond and his wife Joan. Along with Jane Marple, they attend a performance of The Duchess of Malfi. All is fine until the words, 'Cover her face; mine eyes dazzle; she died young' are spoken. Gwenda screams and runs off. She tells the kindly Miss Marple that when she heard the words, she saw in her mind's eye, as if she were looking through a banister, a woman named Helen being strangled by a man speaking those very words. Miss Marple finds the word 'through' to be most instructive. That means that Gwenda was a little girl who wasn't tall enough to look over, but had to look through.

So, did Gwenda witness a murder when she was little? Why is this house so well-known to her if she believes she has never been to England before? When Giles arrives, he and his wife and Miss Marple begin looking into the situation. The title is a play on the words, 'let sleeping dogs lie.' In Miss Marple's view it might be better to let it be, to not investigate because it could lead to terrible truths which have been kept secret for almost twenty years.

I loved this. Miss Marple had a really strong role which she doesn't always. Her mind is as clear at the end of her cases as it was at the start. Gwenda and Giles are a sweet young couple, and the reader roots for them to come through the horrors that are unveiled without losing their youthful love for each other and love for life. They do. 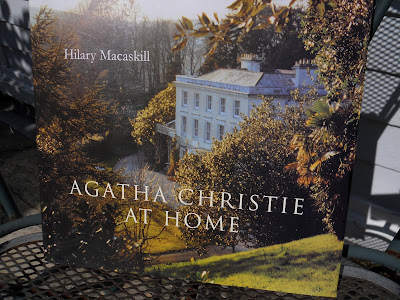 According to Agatha Christie At Home, in 1940,
Agatha began two books as insurance for Max and Rosalind, later assigning to Max the copyright of the final case for Miss Marple, Sleeping Murder, and to Rosalind the final case for Poirot, Curtain.

I find that incredibly endearing, and also amazing in that she thought her husband and daughter would need an 'insurance' book. Of course, she couldn't look into the future and know she would be one of the top best-selling authors of all time.
Posted by Nan