February with Gladys and Rachel 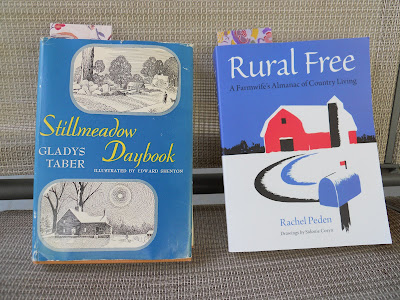 To learn more about this yearlong adventure with Gladys Taber and Rachel Peden, you may scroll down to 'letter topics' and click 'A Year with Gladys and Rachel.'


Gladys begins the month with the seed catalogues. Now some of them come in the mail before Christmas. But one thing never changes. The lure of those pictures and words pulls the gardener in every time. Gladys even wrote a bit of doggerel about it.

Ah never blooms so red the rose
As in the garden pages glows,
Never crops so free from pest
As on P. 20 and the rest.
And all the beauties we'll be growing
Blossom in catalogues without our hoeing.

I love it when Gladys tells of days gone by.

… a party for my gang. We just swarmed all over everything and ate like mastodons. Rolled up the Orientals and danced. Finished off with hot chocolate beaten with Mama's Mexican beater and with cinnamon spicing it, and dollops of heavy sweet whipped cream - plus the rest of the tiny heart cakes.
And finally, when Valentine's Day was really over, … a moonlight walk with my beau along the snow-deep streets of the little town.

Light years away from drinking games and more-than-romantic-walks at the end of the day.

Gladys writes of a topic close to my heart. I've written before about mystery heroines who drive me crazy by taking unnecessary chances. Apparently this is not a new phenomenon. I shall quote quite a bit from this section since I found it so interesting.

Jill has been reading the current mysteries. I read two and got so cross. My quarrel with mystery writers is that their heroes and heroines behave so stupidly that I lose patience with them right off the bat. The heroines always go sneaking about dark houses at midnight after a murder, just looking for a good book to read. The heroes rush into black alleys looking for a guy who knows all - and finds him all right. Nobody on the right side ever carries a gun. If he is a cop, he leaves it at home, if a newspaper man, he doesn't care for guns. Hero and heroine always tell all to anybody around, who is, naturally, the murderer or his best pal. They get into strange autos, they go into dives just for the fun of it apparently. And when they really know who murdered Mr. Bascom, they go right up to his hide-out like a Fuller Brush salesman and take him to task in a very moral but impractical way. At this point, I feel they deserve to be killed. … The author always saves them, but are they worth it, I ask.

Having just watched the Westminster Dog Show, it was most interesting to read about the difference between dog shows in the United States and Canada in the 1940s and 50s. Jill, her housemate, is not only a dog handler, but also a well-respected judge in the dog world. They go up to Montreal to a show.

The show was a real experience. Jill judged for six hours, I should say, and in all that time there was hardly a sound. The gallery sat so still that one had to whisper if one wanted a glass of water. There never was anything like this in the United States. At our dog shows you yell to be heard. The concentrated attention was terrific. Jill said it took her an hour to get used to her voice being the sole one booming out as she gave commands.
There was no argument between handlers, nobody protested any score, everyone thanked the judge, thanked the stewards. It was a lesson we shall never forget. Such sportsmanship is a rare and wonderful thing to behold. ...
Most of these Canadians were interested in one aim, to have their dogs educated, to do a better job themselves. If they failed, they accepted it quietly. Whereas often in our country, a judge can be mobbed by disappointed handlers.

In addition to these topics, Gladys tells of an indoor winter picnic, the importance of dogs over dishes, and even weighs in on the debate, still going on today, about who really wrote the works of Shakespeare. And she says,

Country living in these days may be rather effete, with music at the turn of the knob, news over the air waves every few minutes, books coming in the mail - and then you can see and hear a whole opera if so minded, on television.
We live in an age, it seems, when the whole world is at our doorstep, no matter where we may be.

There is much dismay these days about the end of hand-written letters. Apparently this lament was issued decades before our time. Gladys says,

Letter writing has fallen out of common practice of late.

As is pretty much the case each month, Rachel's writings are centered on the down-to-earth observations of farm life. Yet she is lyrical and poetic in her descriptions of what might be considered the more mundane activities. She sees beauty, and philosophical applications, and often, humor in most everything.

In February a farm is like a child's hand, opened and held up to show that nothing is concealed in it. Without leaves to veil the farm buildings and fields, the naked facts of a farmer's work habits and holdings are revealed even to the casual traveler passing along the road.
Did the farmer get the disk put away after he finished the wheat field last fall, or is it still out in the field rusting away its spring trade-in value? Are the cattle fat or thin? …
Nothing is hidden in February.

In this passage the reader can almost see and smell what she is writing about though probably few of us know it firsthand.

In the doorway of the barn, a wheelbarrow, freshly filled with silage, was standing. Steam was rising up from it into the cold air, like steam from a gigantic kettle of soup just taken off the stove. At this time of winter, silage still has a pleasant pickledy smell, with a suggestion of sorghum. Cattle like it. The cows in the barn could smell the steam and were bawling in happy anticipation.

There are things that bring the reader up short, with a 'whoa, that really was a long time ago,' such as mention of a 'vanilla salesman.' Can you imagine? A man who came around every six weeks or so selling

While that made me think it was the 'olden days,' there were things that were startlingly progressive. In a piece about the quail family of nine sleeping in a circle with their heads pointing out for 'extra security' from foxes, she quotes the Wildlife Federation:

Predation is a natural process, and biologists believe the way to more abundant wildlife is not through the killing of predators but through the management and strengthening of the environment.

Rachel is concerned about this environment, which was also quite forward thinking in the very early 1960s. While spring is on its way, she ponders that by summertime there will be a

barrage of roadside spray, giving the summer an early-dead appearance and an unpleasant chemical smell. What the effect of roadside spraying may have on insects and birds and small wild creatures that would have dwelt under the vegetation is not pleasant to think about.

And even then biologists were saying that the 'danger from herbicides and pesticides is greater than from atomic bombs.'

When the early, northbound robins get here, they will be observed by conservationists fearful of the bad effects of roadside spraying. For the danger is in earthworms that come up temptingly at night, exposing their long, pink and gray moist deliciousness to the hungry robins. Earthworms store up DDT in their bodies; but robins do not realize this, and unfortunately, there is no way to warn them.

She tells us the realities of farm life, and adds humor to temper the seriousness.

He takes his family's living in his hands when he decides whether to sell the steers now or borrow $1,500 more from the bank to finish them out for market, and risk a drop in the market price. … Shall he set fifty acres of tomatoes, risking a hot, dry summer and a shortage of hand labor to pick them? … Shall he mow all twenty-four acres of a field and risk getting it rained on before it cures, or shall he cut half and lose the extra time?
But in hauling manure he can never lose. It is life to his fields. Regardless of whether the crop is surplus and gluts the market and swamps the national farm policy, or scarce and precious, the soil has to be maintained. A manure-hauling farmer knows he is doing the right thing.
The only trouble is, everybody else in the community, and everybody driving past, knows it, too. On windy days, a manure-hauling farmer couldn't attract more attention if he were driving a steam calliope.

Three quarters of my year with Gladys and Rachel have now gone by. Reading these monthly essays are a most pleasant way to mark the passing of time, theirs and mine.
Posted by Nan