A Place To Die by Dorothy James 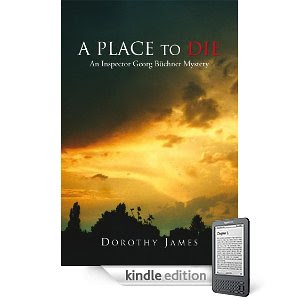 
I didn't set out to visit three fictional retirement homes in the past few months, but somehow I ended up doing so. Each one has been enlightening and enjoyable. The first was the Phil Edwards book Retirement Can Be Murder, and the second one was the movie, How About You.

If you'd like to listen to Strauss' Tales From The Vienna Woods as you read along, you may find it here.


I have recently joined Goodreads. I haven't written any reviews there, but I have created three lists: currently reading, to read, and read. This is where I first heard of A Place To Die. I am very interested in post-war/modern day Austria and Germany, and this is the first fictional book I've come upon which explores the lives of everyday people there since the Second World War. I would appreciate any recommendations you may have. I am also interested in portrayals of older people. If we are lucky, we shall inhabit their landscape.

Eleanor and Franz Fabian have come over to Vienna from New York for the Christmas holidays to visit Franz' mother who has recently moved from her apartment to Haus im Wald, a facility for older people in the Vienna Woods. There are people living there whose ages span thirty years from Christa, in her sixties who happens to be an old acquaintance of Eleanor's, to a retired Baptist minister who is 93. There are two sections. One offers apartments which are much like ordinary homes, while the other is where those who need nursing care live, and usually where they will die. The Fabians' experiences are interspersed with the detective work of Inspektor Georg Büchner. He enters the story because there has been a murder at Haus im Wald. Herr Hans Graf, a healthy, active man in his seventies has been hit over the head in his apartment. Four people have already died in the month of December, and though they died natural deaths, this latest death has everyone on edge.

Dorothy James did an excellent job of bringing the characters to life. I didn't have to go back and see who someone was, as I often do in books with a lot of characters. The author also brought authenticity to the setting by using, as I've shown above, some of the native words and spellings. The women are all 'Frau' and the men, 'Herr.' Occasional forays into the city proper gave me a good sense of Vienna.


Vienna is a small town you know, it's not London or New York.


The period of the Second World War is rarely discussed amongst the inhabitants themselves.


Silence on certain topics has been a way of life.


The man who was killed had been an art dealer, who inherited many works of art from his family who obtained them through 'Aryanization' during the thirties and forties. We learn that he


came round much later to seeing the gross injustice of all that. … he made large contributions to restitution funds, though … there are those who still think he has certain debts.


Could this be connected to his murder all these years later? Or is someone jealous of his romantic relationship with a beautiful former opera singer who also resides at Haus im Wald?

While investigating the murder, Inspektor Büchner learns of anonymous yellow post-it notes which many residents have received. They are extremely cruel and lewd. There is a lot going on in this place.

This is a book of truths. Old age is not something that is glossed over, or presented in a perky, upbeat way. The Inspektor and the Fabians are people in their fifties and sixties looking ahead to their own older years. The older ones live honestly with their aging. They fear loss of faculties and they fear falling but honestly, their emotions are not all that different from those of the young. We see that the old have all the passions, angers, and joys that younger people have. There are many stories within the walls of this residence, and we get to know them all.

Haus im Wald is a fine place for those who have the money. A contrasting facility is noted for those who do not. There are musings about how it would be better if there were a gym, offering exercise and strength training, and an opportunity for massage instead of drugs.

This is really a wonderful book, unlike any work of fiction or mystery I've read. It is quiet and thoughtful. I've mentioned that I use my Kindle only for bedtime reading, for ease of holding. But while reading A Place To Die, I brought it down every morning, and this became my 'downstairs' book as well. It is intelligent, caring, informative. I can't wait for Dorothy James to publish a second book in the series. Büchner is such an interesting character - a loner policeman who has never married, but isn't really lonely. There is another character I suspect may make an appearance in further Vienna stories.

Here is a view of the Vienna Woods in winter. The weather, the resident rooks, and the very air are so well-drawn that it almost feels like being there as one reads along in the book. 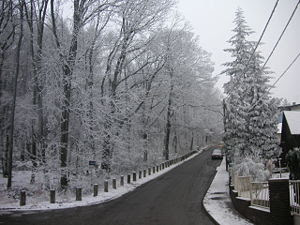 You may read some brief reviews at Goodreads. There are interviews with Dorothy James at I Am A Reader Not A Writer and at The Character Connection.

The author's blog is here.
Posted by Nan