Flowers in the Rain & Other Stories by Rosamunde Pilcher 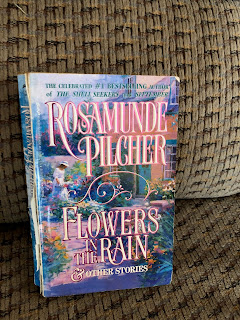 
Flowers in the Rain by Rosamunde Pilcher 1991

This is a collection of stories, and my very favorite book among all her writing. The characters and situations seem real to me. The scenery and house interiors are described expertly.

And now here I am, 14 (!!!) years later rereading this little gem after Rosamunde Pilcher has died having lived a good, long life.


I love short stories. They feel like perfect little snapshots of a moment or a day or even a longer time. There is no excess. I think an author must be particularly talented to be able to take an idea and express it completely in just a few pages. And I think Rosamunde Pilcher was particularly skilled in doing so.

This collection was published in 1991, but many of the stories appeared in various publications from 1983-1991. I can barely bring my mind back to the days of stories in "women's magazines". Her stories were in all the popular American ones, Good Housekeeping, Ladies Home Journal, and Redbook. (Were those available in the UK as well, or were her stories published in different magazines there?) These were all magazines my mother read, but by the 1980s, I didn't read any of them. My loss. I know some of you have collected these old magazines, and it must be wonderful to browse through them. There is an interesting article about them here. The old ones are really of their place and time. Though some are still going, they aren't like they were in my mother's day.

One of the aspects of Rosamunde Pilcher's work I adore is the coming together of different age groups. The young admire the old, and the old are accepting and understanding of the young. They are friends. This is something that has always been important to me. I have had older friends, women my mother's age, and now I have younger friends, the friends of my children. I feel very lucky.

The author has a great understanding of all ages. She writes about children as well as she writes about adults. And the children get along with older, caring adults. Readers are happy to spend our time in their company.

In November 2016, I put the following into a draft for a future posting, and it occurs to me that now is the time to use it.


Yvette left me this comment a while back on my In the Garden with the Totterings post talking about the old Victoria Magazine.

"I've heard of the Totterings (probably from the same Victoria Magazine - gosh how I miss that magazine, the older issues, I mean. I have so many clippings and many of the covers)"

It seems to me that the 1990s were rather a golden time for homey types like me. There was Victoria Magazine, there were Rosamunde Pilcher's books, there was Mary Engelbreit, and there was Susan Branch. Each of them celebrated the simple, quiet joys of home and garden and family life. When I was in my forties and fifties these women sustained me in my own love of home. I was part of yahoo email groups whose members had the same kinds of interests. I now feel more adrift in my own boat. I do miss the camaraderie with women which the magazine and the books and the discussion groups used to make me feel.

Over two years later, I still feel the same way, and the feeling is made more poignant with the announcement of Rosamunde Pilcher's death. She was so important to me, and to fellow readers, that one of the groups we formed was called Rosamunde's Kitchen. It was so named because her books and stories always had the best kitchens! They were big spaces with room enough for a large table (always "scrubbed pine"), a writing desk which was the pulse of the mother's life, and often a couch. Her descriptions are still of my ideal kitchen! In every book, the author brought rooms and houses and gardens alive in the reader's mind.

Some of these short stories end with "happily ever after" and if not, they end with "hopefully ever after". A common theme is going back to the country, to a place where the character vacationed as a child, or lived as a child, or moving to the country as an adult and finding it is just where the person should be. She has fond memories of the places, the buildings, the gardens, the villages, and the people. These are stories of the healing power of nature. Rural life is a well-defined part of each story. And what a rural life it is, with dogs and horses and flowers and weather! Honestly, I read myself into the locale being written about, I become an observer, at close hand, of the beauty and calm of the various places.

Her characters are not people without pain. There are widows, there are children whose parent has died, there is unhappiness. They find a way to bear their grief, with the help of people showing them gentle kindness.

I wrote about one of the short stories, The Watershed here, if you'd like to read it. When I wrote the blog post, I had a few comments saying they didn't know Rosamunde Pilcher had written short stories. If you have read her novels, but haven't picked up the two books of short stories, you have such a treat in store. Each story is a mini-book.