In June 2016, I wrote a blog post about washing dishes. I was full of enthusiasm about not using the dishwasher anymore. Of course, I never wrote about starting to use the dishwasher again, and why. And now, I don't remember why. Maybe because it was there. Probably because I was still quite busy with little ones then. Hazel was only 3 1/2, Campbell was just 3, and Indy was about to turn 1.

Well, now 2 1/2 years later, the dishwasher broke down again. I told Tom to give me a week before getting it fixed to see if I might enjoy going back to doing the dishes by hand. At the end of the week, I said I wanted to try another week. And so it has gone on with nary a negative from me. In fact, I kept saying what a relief it was to just wash up the dishes as they were dirty instead of loading and loading the dishwasher and then waiting hours for it to be done. Or waiting an hour for a "quick" load that I can do by hand in 5 minutes! It is a satisfying feeling to do the dishes and have them done rather than "do" them in the dishwasher and wait. And there was a sweet side benefit that I never thought of. I texted my sister-in-law that day and said "can't do this with a dishwasher, can you!!" 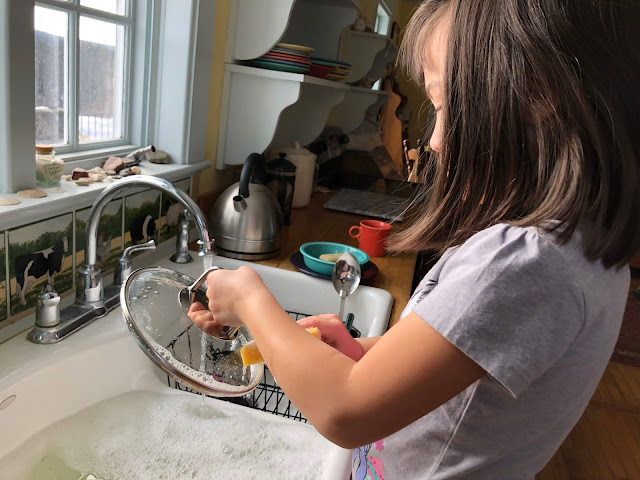 It has now been almost three weeks, and all the big dishes have been washed like the crock pot, bread bowl, 9x13 pan. I'm still smiling, and I'm dreaming about just what might go into that space after Tom removes it.

In Anne Tyler's If Morning Ever Comes, a grandmother says that "the only thinking time she has is when she's doing the dishes." Sometimes I listen to music, or a good radio program, and sometimes I just sit and ponder while looking out the window. 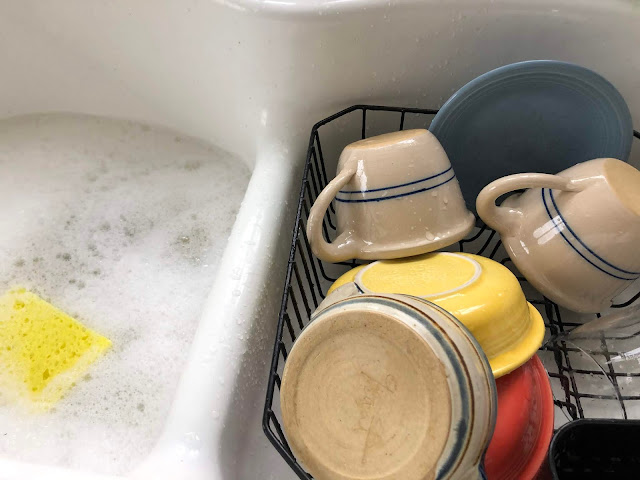