I really do mean to jot down my monthly readings, but, hey, six months is better than 2016's yearly report!

In the early months, I spent my reading time right here in New Hampshire, down on the seacoast. The author changes the names of the towns, but anyone who lives here knows exactly where he means.

I have meant to read Brendan DuBois (pronounced boys) for ages, and finally, after listening to him on NHPR here and here (and just a warning you may not want to listen if you are just beginning the books), I bought some of his books for the kindle and read eight of them. Amazon says that Lewis Cole, is "one of the most appealing heroes in mystery fiction," and he really is. We learn in the early books of his back story and how shattered it has left him. He is settled into an old house right on the sea where he rebuilds his life in the community, solving mysteries along the way. He is not your usual 'hero.' He is close to a mafia type from the North End of Boston. He does some things he is not proud of. But he also is very kind to women, and is close friends with the local cop and newspaper writer. I don't want to give much more detail because it is very interesting how his story unwinds with each book. This is a series that needs to be read in order. Part way through my reading, I actually emailed the author. A few days later it came back saying it was undeliverable. Must have been an old address. But I wanted to tell him how bad the kindle versions were of the early books. There were glaring misspellings. I told him that I loved the books so I soldiered on, but that some readers might be so put off they would just quit. So, I would recommend that you buy or borrow the print versions, at least for the first several in the series.

I've not read any books like this before. They are mysteries, but also I think they could be called thrillers. There is a lot of excitement.

Have you noticed how the price of kindle books just goes up and up? I never minded paying eight dollars for the old mysteries I love, but it seems like newer books cost almost as much on the kindle as they do in print. In most cases, I'll  go with the print version, and just read the old books on the kindle.

I read The Little Book of Hyyge which I had noted here. Although I am interested in the concept, I found the book labored to make its point, and said the same things over and over in different ways. I don't think a whole book on it was necessary. An article would suffice.

I read the six books in the Fred Vickery series one right after the other. They were written in the 1990s by Sherry Lewis, and I found them really wonderful. He is a widower, a few years old than I am, with adult children and grandchildren. Only one of his four kids lives in the same Colorado town as he does, but the others pop into the books, sometimes being the main story. These are mysteries, and though the setting is nice and he is a great character, they are not 'cozy.' Bad murders happen, and innocent people are suspected. Fred is friends with the Sheriff, who was his daughter's high school boyfriend. The local doctor is his friend but also his nemesis, always watching what Fred is eating after a small heart attack. The books develop as the series moves along, and we find out more about the man, his late wife, and his family. I really love these six books. They are an excellent little set. The titles and order of the books may be found here.

I read and enjoyed two old ones by Freeman Wills Crofts who should be as well known as Agatha.

I continued where I left off in the Hamish Macbeth series (number 26) and decided I am done. I just don't like them enough for me to spend my time on. I also checked in on Simon Brett's Fethering series and after only a few chapters I decided I was done with those books, too.

The MC Beaton, Hamish Macbeth book, Death of a Chimney Sweep, and Peter May's The Blackhouse were read for the Read Scotland Challenge. As bland as Hamish was, the Blackhouse was an edge of my seat kind of book. Whew. And I've been assured by my friend Kay that the second one, The Lewis Man, is even better. I bought a lovely picture book companion to May's work that helps bring the setting alive. 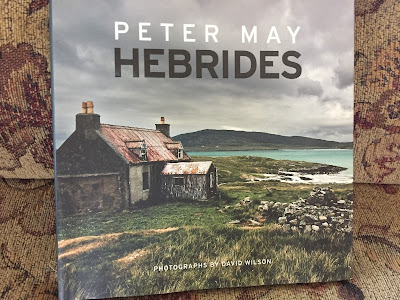 I read In This Grave Hour, the 13th and latest Maisie Dobbs book by Jacqueline Winspear. It was wonderful. I love this series so much, and there is a special place in my heart for these excellent books.

I read an installment in the always delightful Coffeehouse mystery series by Cleo Coyle - A Brew to a Kill. Snappy dialogue, intelligent characters with loads of personality, and that wonderful New York City locale.

I began the first book in a new series by Susie Steiner, called Missing Presumed, which I liked very much. I could see the BBC or itv making this into a television show. I was annoyed by the bits about the main character's dating life, but not enough to keep me away from the great story.

A refreshing quality about the older mysteries is that there is very little about the main detective's life. Sometimes I just want the mystery, thank you very much, and I'm now reading more Michael Gilbert, one of the very great writers, I believe. One of his sleuths lives in a boarding house and that's about all the reader knows!

I didn't write about the other 'perfect' book I read that I mentioned in my book report on Stir. I want to spend a full post on it at some point, but I'll tell you here what it is, The Song of Hartgrove Hall, published in Great Britain as The Song Collector, by Natasha Solomons. I loved it beyond words, and will try to do it credit when I finally sit down to write about it.

So there you have it. My reading from January through (most of) June. 29 books.