Half Wild by Robin MacArthur 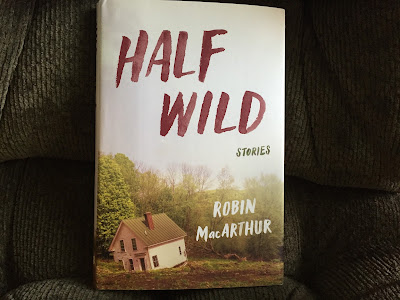 
This is a question posed by the man in Hannah’s life in the last story in this new short story collection by Robin MacArthur. He’s a ‘photographer with a trust fund.’ She works as a receptionist for a graphic design firm. They live the good life in Seattle. She has gone back to Vermont because her mother has cancer. The answer to the question comes at the very end of the story. ‘They’re wild. Ridiculous. Alone in these houses.' Women who when they know they are dying can still say, “It’s okay. Grace and beauty and life and love. It’s okay.”

These short stories are set in the fictional town of Vicksburg. It is rural Vermont, hardscrabble, poor Vermont, where people are selling their land because they need the money. Family farms are disappearing and expensive houses are being built where there used to be cows and hay fields. Some stories are set in the present and some in the past. Some characters appear in more than one story. Someone might be the narrator in one story, and in another there is mention of her death. Some are narrated by women, others by men.

This may surprise you, but the author who came to mind when I was reading was William Faulkner. Not that their styles are the same. Robin MacArthur doesn’t have any sentences that go on for pages. But both writers feature rural people who are real. The reader knows that they exist outside the minds of the writers. They are not ‘types.’ They are individuals with different life experiences.

There is an old woman who feels guilty that she didn’t speak up for the young Abenaki man her father beat up. There’s a father who kills himself because he can’t live with how he drove his handicapped son to his death. There’s a woman completely addicted to opioids and heroin. These people live in double-wides or campers or ramshackle farmhouses they can’t afford to take care of, existences that the upper middle classes could not even begin to imagine.

I hear on the radio that there are jobs available but people need to ‘relocate’ to find them. The word is thrown out as if it is nothing. It just isn’t that easy when you love a place. This is a book about the people who stay regardless of the circumstances. And even those who go away sometimes come back. In an interview, Robin MacArthur says that she and her husband have worked all sorts of odd jobs,

which is really what most people who live in Vermont end up doing. It’s a place where you choose your location over your career. You find a place that you want to live and then you figure out a way to make a living.

There is a couple whose house is more ‘like a collection of rooms tied together than a house - each covered in tar paper and whatever kind of siding came our way at the time - tin, plywood, pine.’ They have no electricity or running water inside. They chose not to have children because they knew ‘they never could have stood it, or liked it, like Tub and I do.’ To an outsider this kind of life might seem intolerable, unlivable, but Robin MacArthur shows the reader that they are in love and deeply happy. The author goes below the surface trappings of life to the human beings underneath.

Robin MacArthur is the granddaughter of a woman whose music Tom and I became interested in decades ago, Margaret MacArthur who moved to Vermont in the late 1940s. You may read her obituary here which will tell you about this remarkable woman. Robin now lives on her grandmother’s land. She is also a musician in a band with her husband called Red Heart the Ticker. She has a blog here.

I first heard of this book when the author was on a radio program. I bought the book immediately and began reading it as soon as it came in the mail. You may listen to the ten minute interview here.

I loved this book.
Posted by Nan