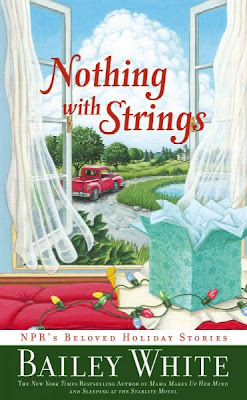 
Off and on for over thirty years, I volunteered for Meals on Wheels. This government program brings a daily meal to the elderly in their homes. I knew that in some cases, I might be the only person they would see that day, and I took my visits very seriously. I didn't just put the meal on the table or into the person's hands. I would linger a while, chatting and checking in on them. I learned early on that these visits are much more than just dropping off food. It is the personal contact which is important. I was aware though that not everyone did it the way I did. The program actually didn't 'encourage' us to stay too long.

There was one memorable day when I visited the turquoise trailer on a lonely hill as I did every week. This day, no one answered the door. I walked around, peering into the windows and saw the old man lying on the floor. It turned out that he was dead.

I remember a former professor who came out to greet me each time in a suit and tie. And the cheery wife of a man who couldn't walk anymore. There was a highly educated woman whose living room had upholstered chairs with antimacassars who taught me something every time I stopped by. There was a woman who used to work in the Connecticut tobacco fields.

I was reminded of my work as I read Bailey White's story. We meet Ida in her house where the morning glories have begun 'nosing in between the screen and the window frame.' They have fairly taken over the living room leaving purple stains on the furniture when the flowers drop off.


"Why don't you just cut them off at the window and drag the vines away?" said the Meals-On-Wheels girl. "This purple will never wash out of your slipcovers." The Meals-On-Wheels girl irritated Ida sometimes with these thorough and practical suggestions. "Why don't you just …" with the just implying that it would be the simplest thing in the world for any person of even the most meager intelligence, and only an old fool would not know what to do when Heavenly Blue morning glories came into the house and stained the furniture purple.

Sadly, I think we all know, or know of, people who are condescending to the elderly in this manner. The only other person with whom Ida is in contact is her daughter Judy who calls every day, and says,


"How was your day?" just like she always did. All Judy really wanted to know was if Ida was still alive and well enough to answer the telephone. There was always a sigh of relief from California after Ida's hello, and the "How was your day?" was just extra talk really.


'a little story about Mr. Rice down at the birdseed store, so Judy could hear that her mind was still sharp and her speech not slurred.'

In just the first two pages I knew a lot about Ida's lonesome life. The only person she sees isn't particularly nice, and the only person who calls her isn't really interested in her as a human being. Achingly sad, but all too common I thought. And then comes a paragraph that shocks the reader. Apparently Richard Nixon regularly shows up in the kitchen making scrambled eggs. The action puzzles Ida and she tells herself it is 'only that Richard Nixon dream again.'

Then another person comes into her life - a new Meals-On-Wheels girl. She brings life and conversation and activity and interest into Ida's world. She really talks with Ida, not at her. She looks upon the morning glories and thinks they are beautiful. She doesn't just set down the meal with the enclosed plastic cutlery. She opens the cupboard and gets one of Ida's own plates, which I suppose haven't been used in a very long time. Ida is delighted to see the old dishes again. One day the girl brings her a homemade cake.


"Just because you are old, that doesn't mean you should have to eat this goop," she said, and threw the Meals-On-Wheels Jell-O into the garbage.

She sits down with Ida while she eats, and tells her own story of how she used to cook for prisoners, and baked them their own individual cakes. When Ida tells her daughter, Judy responds just as you might expect.


"She sounds like a nice little friend for you, Mama."

Well, she is that and so much more. She makes Ida feel that she isn't crazy. Her answer to the Richard Nixon visits is


"You couldn't pay me to eat an egg cooked by Richard Nixon!"

As the story went on I kept feeling happier and happier for Ida. One day when the girl polishes Ida's silver for her, she asks Ida to sit down and 'keep me company.'


It had been a long time since Ida had kept anyone company. It felt good to sit and talk about just anything at all.

And then the old Meals-On-Wheels girl returns after her months-long illness.

Bailey White is one of the most compassionate writers I've read. She is never unkind toward her characters regardless of their status in life or their degree of eccentricity. I have loved her books Quite a Year for Plums, Sleeping at the Starlite Motel, and Mama Makes Up Her Mind. She tells an annual Thanksgiving story on NPR, and you may listen to them if you go to the site and type 'Bailey White' into the search bar.

I came upon a simply wonderful video of an interview with Bailey White. If you don't know her work, this is a great introduction and if you already love her writing, you will so enjoy this conversation with her.