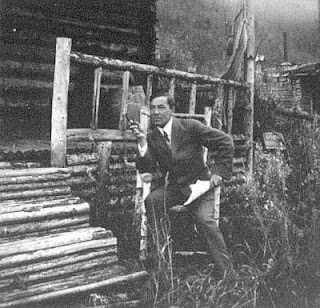 An ancient gaffer once I knew,
Who puffed a pipe and tossed a tankard;
He claimed a hundred years and two,
And for a dozen more he hankered;
So o’er a pint I asked how he
Had kept his timbers tight together;
He grinned and answered: “It maun be
Because I likes all kinds o’ weather.

“For every morn when I get up
I lights my clay pipe wi’ a cinder,
And as me mug o’ tea I sup
I looks from out the cottage winder;
And if it’s shade or if it’s shine
Or wind or snow befit to freeze me,
I always say: ‘Well, now that’s fine . . .
It’s just the sort o’ day to please me.’

“For I have found it wise in life
To take the luck the way it’s coming;
A wake, a worry or a wife -
Just carry on and keep a-humming.
And so I lights me pipe o’ clay,
And though the morn on blizzard borders,
I chuckle in me guts and say:
‘It’s just the day the doctor orders.’ ”

A mighty good philosophy
Thought I, and leads to longer living,
To make the best of things that be,
And take the weather of God’s giving;
So though the sky be ashen grey,
And winds be edged and sleet be slanting,
Heap faggots on the fire and say:
“It’s just the kind of day I’m wanting.”

When Tom's father died, we inherited one of his bookcases, as well as any of his books we wanted. We chose mysteries, nonfiction, and poetry, including a book of Robert Service's poems. As I was thumbing through this morning, I was taken with this one, whose words seem to echo those of Roger Ebert in yesterday's quote du jour. 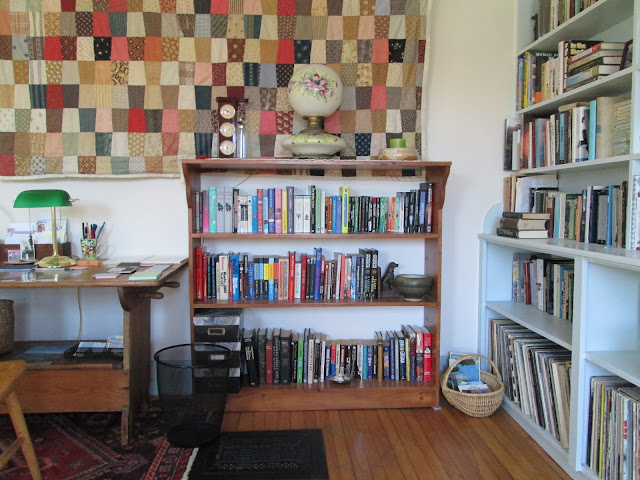 Can you see the coffee stains? Was he reading the poems as he drank his coffee, and then put the cup down on the book? This is why I love books that belonged to someone before me. 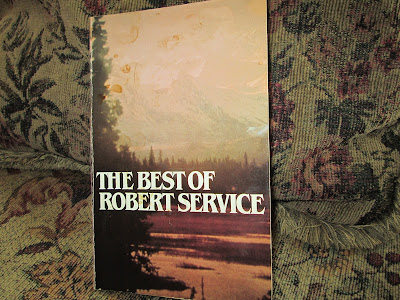