My mother was not a gardener. She didn't grow and tend a flower garden, but she did have hollyhocks growing up on the east side of the house. In my memory they were there every summer of my childhood, but of course it may have been just one year. I recently heard from my mother's only living sister that their mother also grew hollyhocks on the farm. I have been trying to grow them at Windy Poplars for the thirty-one years we've lived here, with only one year of success. That year I bought a plant from a local nursery in the spring and it produced beautiful yellow flowers. This year I got serious and planted hollyhock seeds under the indoor lights, and wow did they ever grow. They were quite large when we transplanted them to one of the raised beds, and now they are huge, with a couple taller than I am. 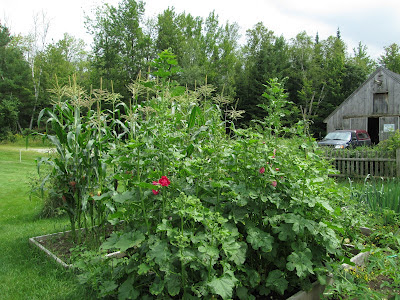 I do battle with Japanese beetles, going out every day with a container of water and flicking them into it with my fingers before they fly off. 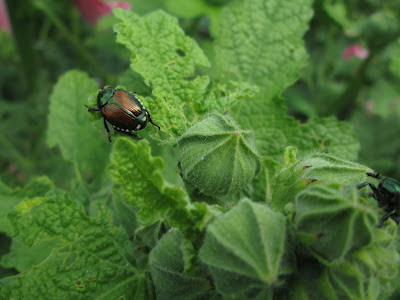 They've done a lot of damage to the leaves. 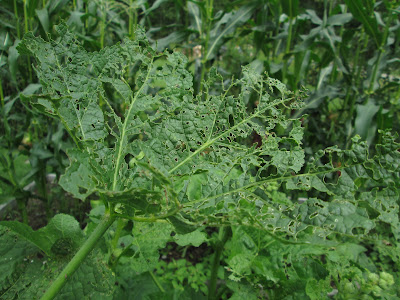 But thankfully, so far, the flowers are not bothered one bit. It is a great joy to see these red and pink beauties. 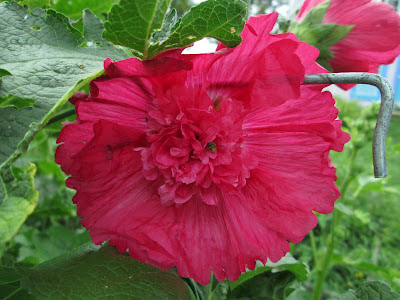 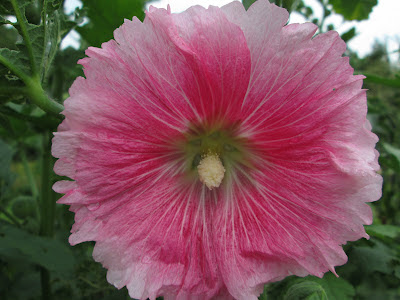 I looked around for a hollyhock poem and found one by the beloved poet Edgar Guest.

Old-fashioned flowers! I love them all:
The morning-glories on the wall,
The pansies in their patch of shade,
The violets, stolen from a glade,
The bleeding hearts and columbine,
Have long been garden friends of mine;
But memory every summer flocks
About a clump of hollyhocks. 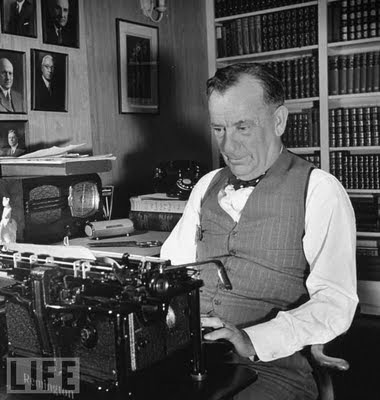 The mother loved them years ago;
Beside the fence they used to grow,
And though the garden changed each year
And certain blooms would disappear
To give their places in the ground
To something new that mother found,
Some pretty bloom or rosebush rare--
The hollyhocks were always there.

It seems but yesterday to me
She led me down the yard to see
The first tall spires, with bloom aflame,
And taught me to pronounce their name.
And year by year I watched them grow,
The first flowers I had come to know.
And with the mother dear I'd yearn
To see the hollyhocks return.

The garden of my boyhood days
With hollyhocks was kept ablaze;
In all my recollections they
In friendly columns nod and sway;
And when to-day their blooms I see,
Always the mother smiles at me;
The mind's bright chambers, life unlocks
Each summer with the hollyhocks.