The cottage garden is a distinct style of garden that uses an informal design, traditional materials, dense plantings, and a mixture of ornamental and edible plants. English in origin, the cottage garden depends on grace and charm rather than grandeur and formal structure.

And that certainly describes the garden at Windy Poplars Farm.
Informal design - definitely. It is 'homely' in the English sense. Nothing really planned. If there's a space, we'll plant something there.
Traditional materials - this is surely true because we grow plants that have grown here since there were people on these acres. Nothing fussy. Just 'plain speaking' vegetables and flowers.
Dense plantings - probably too dense to some people's way of thinking.
Mixture of ornamental and edible - oh yes. Those hollyhocks I've raved about are between corn and tomatoes.

I took some photos which illustrate the 'friendship' between flowers and vegetables.

Tomatoes amongst the hollyhocks 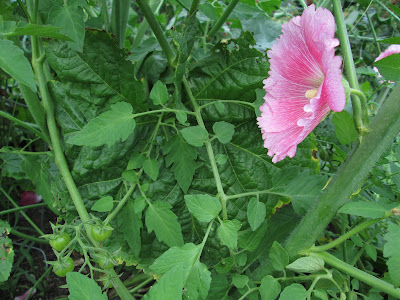 You've already seen those panolas which fill the aisles between the raised beds. In addition to them, some mallow has popped up and grown very cozy with the zucchini leaves. 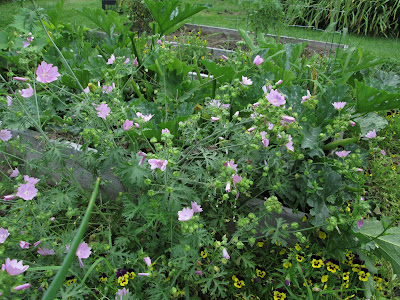 Yellow beans stretched out and tangled in the tomato plants - the bean flowers are pink and the tomato flowers are yellow. This was taken a while ago. Just today I pulled the beans down. Next year I'm going to plant fewer. I'm the only one who eats them, and I couldn't eat them fast enough this year. I think I'll plant them along just one of the bean poles, and plant sweet peas along the others. I didn't have any sweet peas this year and how I missed them. 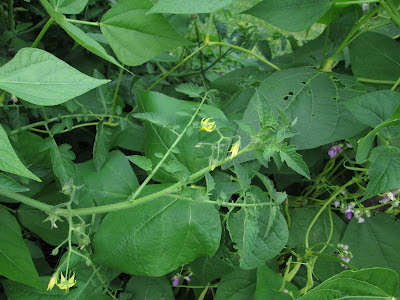 I also have milkweed growing with spiderwort and globe thistle. All three have gone by now and need to be cut back. I'll wait till the milkweed pods 'pop' out the lovely silky down. I read the most remarkable information about milkweed here. 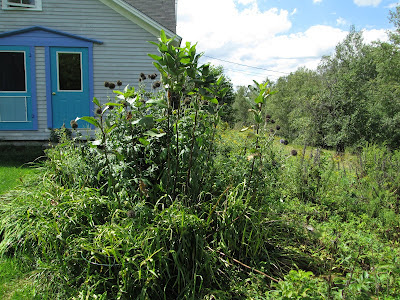 It has been an uneven year in the vegetable garden.
The failures: carrots and cucumbers. One carrot came up, and no cukes. Who knows why? And the peas were very spotty. We had only a couple meals of them.
All the raspberry plants died, and we have no idea what happened. It is a two-year cycle, and the dead old canes from last year were there, but no new ones came up. Same thing happened with the Queen of the Prairie out by the barn. There are mysteries in nature.
The successes: hollyhocks!
Potatoes that came from organic store potatoes that had sprouted in the warm weather. We put a few in one of the raised beds and got a lot of delicious potatoes. We've always bought organic seed potatoes through the mail, at quite a high price. We won't have to do that anymore!
Tomatoes have never grown so well or been so prolific. We started them inside, and used Chickity Doo Doo on the seedlings, and they just went to town!
Yellow beans - there were zillions. The poles Tom put up last summer stayed through the winds and snows of winter.
The best corn ever! 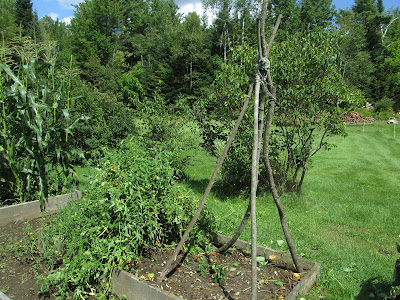 For the first time this year I planted Egyptian Walking Onions. If interested, you may read more about them, and order some here. We are leaving ours to grow this year. 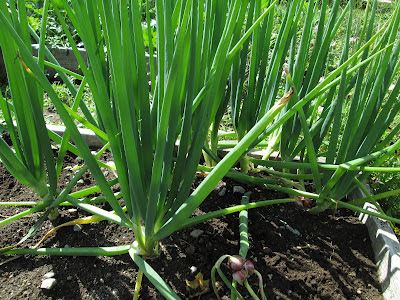 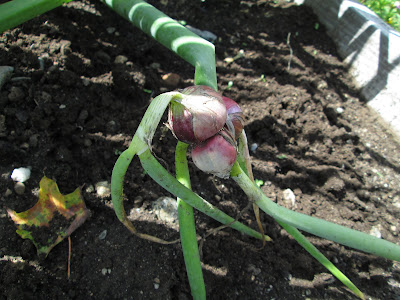 We didn't get garlic planted last fall, but it has been ordered and will arrive in October.

For years we've had two peony plants. They've been on the blog several times. They are out by the terrace steps, and can only be seen if we are in that area. I've ordered six plants from White Flower Farm (one called Nancy Nora) and they are going in along the fence so we'll see them all the time. Peonies are so nice because the leaves are lovely before and after the short-lived beautiful flowers.

Years ago we decided to plant bushes alongside the kitchen garden area to draw more birds. We now have lilacs, honeysuckle, mock orange, and the tall William Baffin rose. The birds flit around all through the spring and summer, sometimes nesting in those bushes. Tom says he thinks of them as companionable.

The woodpile is coming along. 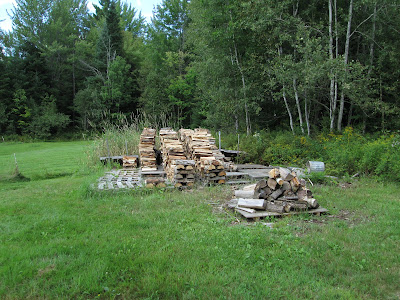 This is the log length wood which arrived last summer that we didn't use up in the winter. We also use trees from our own land that have blown down, or that are safe for Tom to cut. 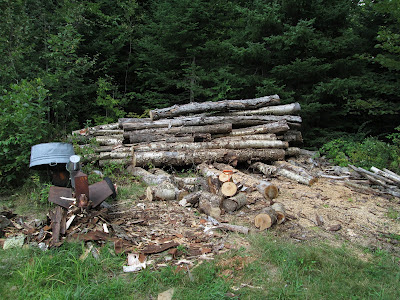 This is a pile of 'junky' wood to be used first when the weather cools. 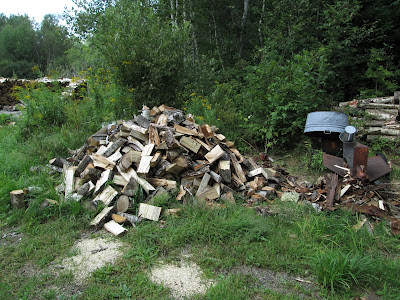 Just as, 'in the midst of life we are in death,' so in the midst of summer we are in winter. When you live here, and burn wood, you have to prepare in the warm season for the colder season.

And I can't end this without more hollyhock photos. We love these flowers.

This is a little blurry, but can you see all the pollen on the bumble bee? Happy bee. 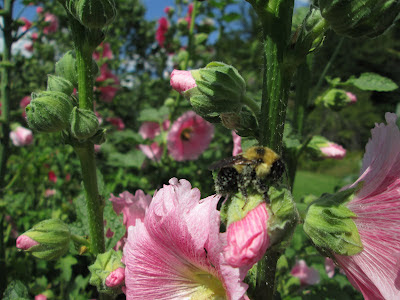 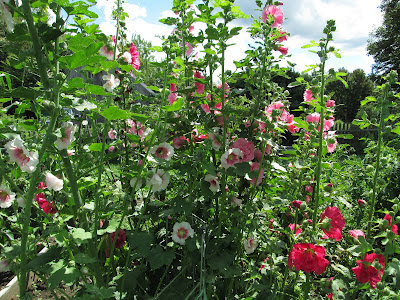 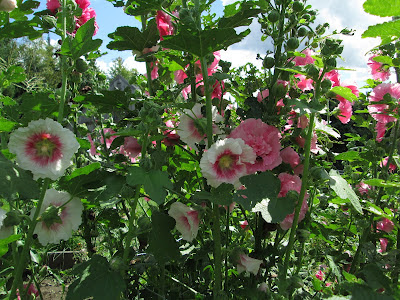 And I don't need to pick flowers for the house when this is the view I have out the kitchen door! 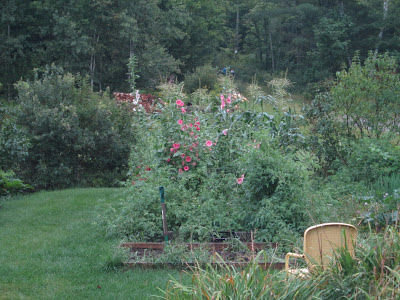