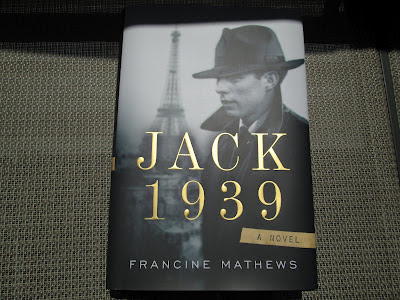 The story of second sons is legendary. The first son, the heir, is supposed to be stable, serious, dutiful. He doesn't get into 'obvious' trouble. His escapades are mostly hidden. But the second son is freed of the older brother's responsibilities. PG Wodehouse makes mention of the useless second son (he was a third son, himself). No wonder they are a little wild. What have they got to lose? No one expects anything of them. I've been thinking about this subject ever since I finished reading Jack 1939, and here we are today with a modern example, Prince Harry's 'adventures' in Las Vegas.

John Fitzgerald Kennedy was born two years after Joseph Patrick Kennedy, Jr. Joe was not only his father's namesake, but the golden boy, of whom great things were expected. When he died in 1944, Jack was supposed to carry on in his brother's footsteps. But before Joe's death, Jack was the playboy, the ladies' man, the callow lad who wasn't taken seriously. He was also extremely ill with a mysterious ailment, and almost died. Francine Mathews does a wonderful job telling the reader about young Jack, and though the book is fictional, there are many truths and facts within the made up story. We are now all pretty jaded when it comes to looking back at our former President. So much unseemly information has come out about him in the years since his death in 1963. Jack 1939 gives the reader a chance to see this earlier Jack, the boy who was shown no love or warmth by his mother, and whose father set the poor example of manhood that so many later Kennedys lived by. We feel great sympathy for the person who didn't expect to live very long, and so lived life with a fearless verve.

In Jack 1939, one man recognized what Jack Kennedy was capable of, and that was the President of the United States, Franklin Delano Roosevelt. Though the director of the FBI, J. Edgar Hoover didn't have a good word to say about him, Roosevelt

never relied on a single source of information. He knew more about Jack than Hoover or his files would ever hold. Jack might be sick and his record might be checkered, but he was one of those rare souls completely at home in the world. … He was much more interested in the ways Jack didn't conform to type. His love of risk. His analytic brain. His need to argue. His willingness to ditch the pack and go it alone.

He summons Kennedy to a private meeting. Roosevelt wants Jack to be his eyes and ears in Europe. In those days there was no spy network. Roosevelt tells Jack that

"We tried to get a network started once, after the last war when the whole Bolshevik thing blew up, but a horse's ass of the Grand Old School declared that Gentlemen do not read each other's mail, and as a result the spies were sent packing. We're heading into a hurricane now with our ears plugged and our eyes closed."

There is a horrible killer at large who leaves a carved spider on the skin of his victims. There is a woman Jack becomes fascinated, even obsessed, by. These are but two characters who are expertly drawn by the author. We also meet Jack's real younger brothers, Bobby and Teddy, and his beloved sister Kathleen who copes with her Catholic parents' disapproval of her love of an Anglican British man, whom she eventually marries (though not in this book). Had she and her husband not died, they would have become the Duke and Duchess of Devonshire. There are wonderful interchanges between Jack and his siblings, and we see that their strong bonds make up for the love they lack from their parents.

Francine Mathews has an excellent 'author's note' at the end of the book telling what got her interested in writing about the young Jack. She mentions a scene from the book which was completely made up but that she thought was 'particularly fun' to imagine. And I think that is the right approach to the whole book. Let it be fun. Let it be 'Jack' before he became 'JFK' with the weight of the world upon his shoulders. Forget the President and the assassination, and enjoy the company of the young man at around the age his grandchildren (Caroline's children) are now.

John Fitzgerald Kennedy at his 1940 graduation from Harvard 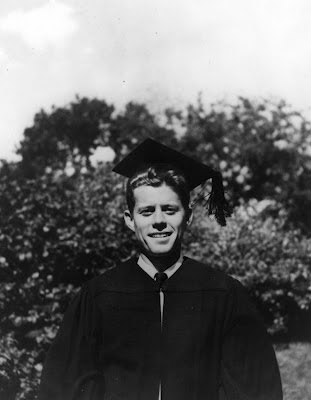