Short Stories on Wednesdays - The Ambitious Guest by Nathaniel Hawthorne 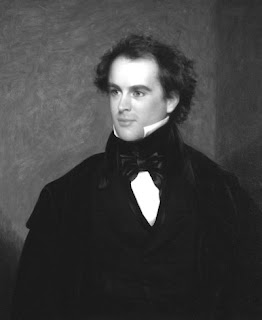 Hawthorne actually died while on a trip to the White Mountains, in Plymouth a town some miles south.

If it had not been true, the tale of the Willey family could have been a short story. It certainly has a twist worthy of the master, O. Henry. This is the account of what happened on an August night in 1826 in Crawford Notch in the state of New Hampshire.

During the fall of 1825 Samuel Willey, Jr. of Bartlett moved into a small house in the heart of Crawford Notch with his wife, five children, and two hired men. The first year the three men enlarged and improved the house which the family operated as an inn to accommodate travelers through the mountains on the desolate notch road. The little cluster of buildings was situated in the shadow of what is now called Mount Willey. In June, following a heavy rain, the Willeys were terrified when they witnessed a great mass of soil and vegetation, torn loose from the mountainside across the river, slide in a path of destruction to the valley floor. As a result, Mr. Willey built a cave-like shelter a short distance above the house to which the family could flee if a slide threatened their side of the valley. During the night of August 28, 1826, after a long drought which had dried the mountain soil to an unusual depth, came one of the most violent and destructive rain storms ever known in the White Mountains. The Saco River rose twenty feet overnight. Livestock was carried off, farms set afloat, and great gorges were cut in the mountains. Two days after the storm, anxious friends and relatives penetrated the debris-strewn valley to learn the fate of the Willey family. They found the house unharmed, but the surrounding fields were covered with debris. Huge boulders, trees, and masses of soil had been swept from Mt. Willey's newly bared slopes. The house had escaped damage because it was apparently situated just below a ledge that divided the major slide into two streams. The split caused the slide to pass by the house on both sides leaving it untouched. Inside, beds appeared to have been left hurriedly, a Bible lay on the table, and the dog howled mournfully. Mr. and Mrs. Willey, two children, and both hired men were found nearby, crushed in the wreckage of the slide. The bodies were buried near the house and later moved to Conway. Three children were never found. The true story of the tragedy will never be known. Poets and writers have conjectured many possibilities. Perhaps the family, awakened by a threatening rumble, fled from the house to their cave, and were caught in one stream of the slide. It seems more likely the Willeys started to climb the slope of the mountain to escape the rising floods and were caught in the landslide. Whatever the circumstances of the tragedy, it has endowed this part of the White Mountains with a legend enhanced by the awesome crags which rise as guardians over the site of the former Willey home. Following the tragedy, an addition was built onto the house which was operated as an inn until it burned in 1898.

There is more about the Willey House, including pictures, here.

Painting of Crawford Notch by Thomas Cole, 1839, just 13 years after the storm. 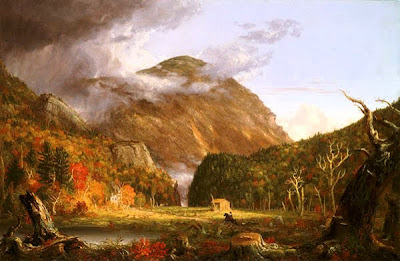 
One writer who wrote his own version of the Willey family tragedy is Nathaniel Hawthorne.

You may read The Ambitious Guest at The Library of America webpage, and if you scroll down to the end of the page, there is a place where you may sign up for the 'story of the week.' This is a wonderful opportunity to read short stories, and other short pieces by a wide range of authors.

Every Monday The Library of America will feature a free Story of the Week. It could be anything: a short work of fiction, a character sketch, an essay, a journalist's dispatch, a poem.

Our story begins with a traveler who stops for the night at a little house on a mountain. It is both a family home and a wayside inn. He feels so much at home among these people that he begins to tell of what is in his heart. He fears that he will die unknown and unremembered by the world. In the course of the conversation the man who owns the house tells of his own yearning, to have a farm in the countryside off the mountain, for this family lives in an uneasy relationship with this mountain which

towered above their heads, so steep, that the stones would often rumble down its sides, and startle them at midnight.

The family has even built

a sure place of refuge, hard by, if he [the mountain] should be coming in good earnest.

Well, you know what happens, but the story is riveting and most interesting all the same. The conversations, the descriptions of the wind outside and the cozy fireside within, and a couple possible premonitions make The Ambitious Guest very appealing. I've not read a lot of Hawthorne, but if you have and haven't cared for his writing much, I think you'll still like this story.

If you are interested in Hawthorne and don't know too much about the man, may I suggest the wonderful American Bloomsbury by Susan Cheever. I wrote about it in May 2007, and read it again in 2010 and liked it just as well. In fact, I've thought of reading it again this year. It really is that good. I think it would be a great college course, and reading experience, to begin with American Bloomsbury, and then read biographies of the writers and their works. I did start The Peabody Sisters (one of whom married Hawthorne) by Megan Marshall but didn't finish. I really should go back to it.

Short Stories on Wednesdays is hosted by Risa at Breadcrumb Reads. 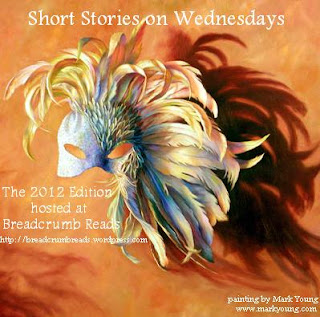