'I feel exactly one day older than yesterday.'

That's what Tom says about turning 60 this day. He painted the bookcases in our study. He's on the tractor hauling wood to the terrace just now. We are invited to Margaret and Matthew's for a birthday supper later on. One sister gave him a huge bunch of birthday balloons, and the other gave him sixty crisp new one-dollar bills. Both his parents are still alive, as well as his step-father, and he's been in touch with each of them this week. Michael's text was 'Happy Birthday Daddy-O' while Margaret's was the Olive Garden Happy Birthday chant which everyone in this family has taken as their own.

Here's a picture of Tom and Matt yesterday bringing a table which had been stored in our cellar, and a workbench down to the new house. It belonged to Tom's great-grandfather, and now he has given it to Matt. 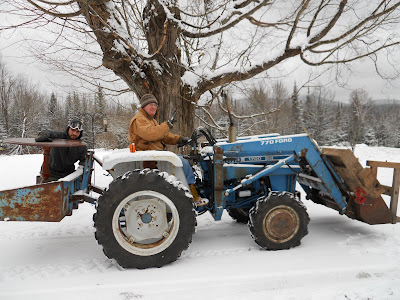 Tom is a man who has the gift of living each day without thinking much about the one before or the one to come. He is a contented man.
Posted by Nan