This Thanksgiving we had an alternative day to most US celebrations. Tom painted and painted! 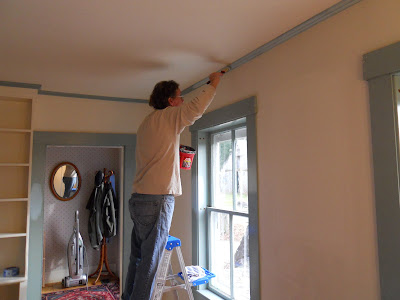 Our study hadn't been painted in almost ten years. It took him the whole four days and then the next weekend to complete the job. My part was choosing the paint colors. I'm just not a painter.

When choosing paint colors and design, I had two pictures in mind - one from the movie, The Holiday: 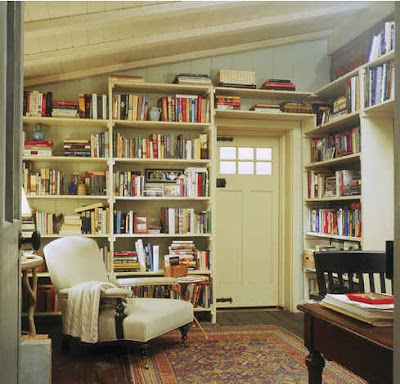 and the other, a photo I found online. 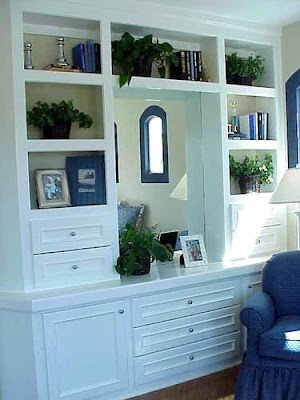 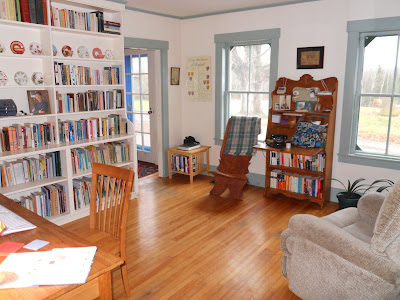 I went back and forth trying to decide, and then asked my daughter what she thought. We spent a fair bit of time in the room, looking it over, and she came up with just the answer - keep the ceiling and walls linen white, paint the bookshelves a light blue (I chose Benjamin Moore's Ocean Air), and the door and trim a little bit darker blue, Benjamin Moore's Gossamer Blue. I hadn't considered this possibility of the shelves being their own color, and thought it brilliant! 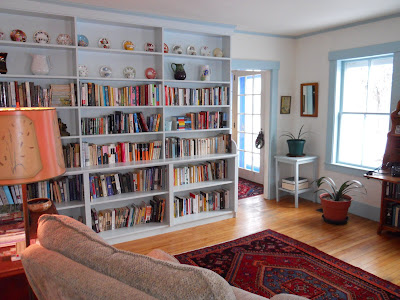 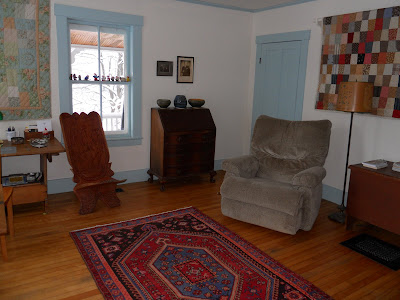 It would be fun to call it a library, but somehow it sounds pretentious for this old farmhouse, so the room will continue to be known as the study. Whatever its name, it is the reading room of my dreams. No distractions, lovely view out three windows, and all those books. I decided to put our nonfiction on the built-in shelves, and was amazed at just how much I have. Methinks I need several lifetimes to read them all. The other shelves in this bookcase house my mysteries, and poetry has its own shelf. My beloved Virginia Woolf has a shelf as she did before. Faulkner has his own shelf, while Hemingway and Fitzgerald, probably to their distress, share a shelf. They have the travel and film books to keep them distracted from one another. Dear Wodehouse and Mortimer share another shelf, which I think would please them both.

I am not a collector, but over the years have come to own some china cups and four vases. I love the way they look above the books as you may see in the 'after' picture.

And there are a couple small shelves in the Larkin desk where our Norton Anthologies from college live, along with new children/young adult books I've bought for myself, and a bit of fiction. We were given this desk many years ago by Tom's step-grandmother. Her husband had won it from selling soap when he was a boy. Here is a little history of the piece if you are interested. 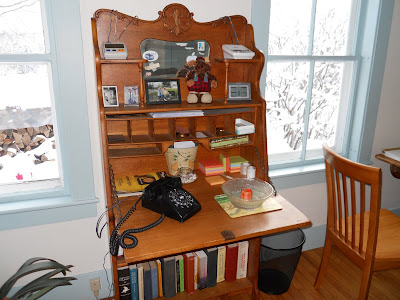 From prowling around the internet a bit I've learned it is possible that my mother's mahogany desk is in the 'Governor Winthrop style.' I believe they were mass-produced in the early part of the 20th century since they seem to be quite common. This is where my mother paid bills and wrote cards and letters. 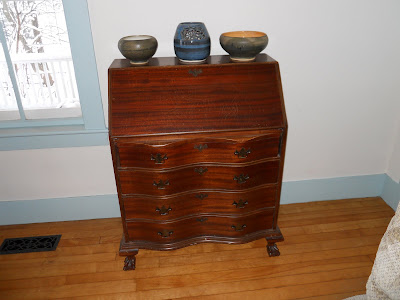 I use a different desk for my personal work, while both my mother's and the Larkin serve as lovely places to store various items.

My desk has a fun story. My father owned a Pontiac dealership when I was growing up. When he died, my mother took over the business of trying to get money that was still owed my father at his death. This was successful to greater and lesser degrees. There was a man who lived out in the country in a bit of a shack, and he gave this desk to my mother in payment of a debt. It can be made into a bench by flipping the top to the back. It may not be worth much, but both Tom and I adore this piece. 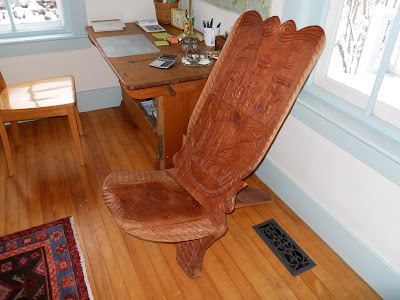 The African chair had its own posting three years ago. ;<) The other evening we put up some photos so that now the room is complete except for sanding the floor which is the first job on the agenda when school is out. These two are my mother graduating from high school, and then nursing school.
Posted by Nan