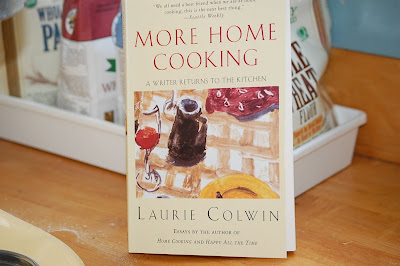 I wonder if all of us who write about books on our blogs have our special favorite reviews. I know I do, and one of them is on Laurie Colwin's Home Cooking.

As I read More Home Cooking, my heart ached that this dear woman was no longer in the world. I kept reading things that made me want to email her, and say, 'yes' I feel the same way. In a chapter called Three Chocolate Cakes, I suddenly saw a recipe called Happy Winter Fudge Cake, from a children's book I've read a thousand times, and which I even wrote about in the early days of my blog. I don't know anyone else who has read this book, and there's Laurie Colwin including a recipe my kids and I baked many a time.

I came upon a neat connection to Pink Sugar by O. Douglas. In that book, Kirsty says:

This is what I have every night - a glass of hot water and a sponge-cake.

If you are like me, you've probably often wondered about the 'sponge' in British books. Laurie Colwin solved this little mystery for me.

Recently I became addicted to the kind of classic, basic sponge cake English women of a certain age can make in their sleep. It is generally used as a plain tea cake, spread with raspberry jelly and dusted with powdered sugar. It is absolutely delicious, and, best of all, it has four ingredients. If you want to be snooty you can call it a génoise. I use a 7-inch round tin, but an 8-inch square is fine.

Cream 1 stick of sweet butter and 1/2 cup of sugar. Beat in 2 eggs (or 1 yolk and 2 whites). Beat until light and fluffy with either a whisk or an electric beater. Fold in 1 cup of flour to which you have added 1/2 teaspoon baking powder and 1 teaspoon vanilla, if you like. (You can do without the baking powder or the vanilla). Bake in a buttered tin for 20 minutes to half an hour. You can eat this cake plain, with stewed fruit, or with ice cream, but it is best with jam and powdered sugar. For grown ups, bitter marmalade is very nice. Your actual work time is about ten minutes, which produces one of the best cakes you'll ever eat.

I love the conversational style of her writing, which of course only makes it harder for readers to realize this voice isn't in our world anymore. She is never intimidating, and happily shares her anxieties as she approaches difficult recipes. "It took me a long time to get over my fear of making jam." She encourages us to try making foods that seem beyond our capabilities. "If I had a dollar for every time someone said to me, 'I don't have time to bake bread anymore,' I would be as rich as Donald Trump used to be." She promptly tells us all the details of making bread that takes very, very little time and effort. She talks about dishes made from scratch:

When you feed them good food, they all say, "Oh, God, this is so great. This is really delicious." And then you say, "This is a cake that took four seconds to make, it was made from scratch by someone who can hardly add two and two. You do not have to go to MIT to make a scratch cake." And they say, " I've never done that. I've just used a mix." And you say, "But if you will just follow these simple directions you will have something excellent, and it will be better than what you have." They've never even thought of it.

The words from The Book of Common Prayer, "In the midst of life we are in death," are never so resonant as when we read something by someone who has since died. They write in a book or a diary as if life will go on, and we, the living, know what happens next. My mother's last diary entry was written the day before she entered the hospital for what she thought would be a simple gall bladder operation, but which turned out to be cancer of the pancreas. She was dead one month and one day after she wrote about her incredibly normal day:

Had tea and toast and tasted good. Raining hard. Tel. Sis to thank her for the flowers.

Yet, the very last words are so prophetic: "my chest and back so lame."

Doesn't it just kill you? It sure does me. In one of Laurie Colwin's essays, she's talking along and then in parentheses writes: "(I am writing in October before the election of 1992)." She never saw this election. She was gone before the month was up. She never got to see the Halloween, of which she wrote: "No matter what else happens in October, Halloween is still the big deal. ... My daughter likes the same thing, year after year after year, and I must confess that I do, too."

Yet, even with the sad fact of her death, it is so worth reading both Home Cooking and More Home Cooking. You will love her voice, her sincerity, her warmth, her humor, her encouragement. She is a joy to read.
Posted by Nan