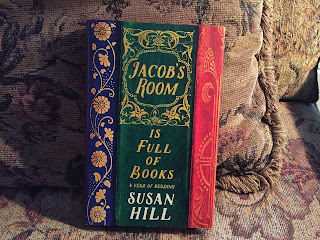 Though there is mention of many spring flowers, Susan Hill's Norfolk seems decidedly cold in March. She describes the wind thus:


I am not going out again probably until June. The wind is like a razor blade shaving off a layer of skin.

Can't you just feel that wind through her words?


In the end I decided it was far too dangerous to go out. Slates were flying.

At the time of writing the book she has lived in Norfolk for five years. She muses on the notion of one's place.


Funny old county. Norfolk, though as I have only lived here for five years, I suppose that I am not entitled to comment. And I will never feel 'Norfolk' any more than I felt 'Gloucestershire'. What does that mean? It is a sort of patriotism, of the right kind. It is an instinctive rooted-ness in the corner of the country where one first saw the light of day. It is attachment. Love. Yes. But an adopted county can never be the same. I have lived in other counties for far longer than I lived in Yorkshire, where I was born, but they haven't left much trace.

Do you feel this way about where you were born compared to other places you may have lived? I wonder if this is a common feeling throughout the world. Do my American readers feel differently about this subject than my English readers? I wonder if living in a small country makes a difference. Fascinating food for thought.

I live about 8 miles from the house I grew up in. I lived on a street in a town, and now live in the country in another town. I don't look upon the old house as more 'home' than here. But I do look at my childhood hometown as 'my' town. Now this may be because I don't live in town, now. I don't walk the streets, and I don't know that many people here. My house and land here make up my world, whereas when I was a kid and later a young adult, the whole town was mine. As I said, fascinating thoughts.

There is quite a sad bit that Susan Hill shares with the readers of Jacob's Room is Full of Books about the late Duchess of Devonshire. Susan had (has?) a publishing company and


Nearly twenty years ago, I enjoyed thinking up, editing (with Sophy Topley, her younger daughter) and publishing Debo's book, Counting My Chickens. We had massive amounts of fun. ... My small publishing company sold many thousands of that book, and it rode high on the best-seller lists for ages. Her dedication reads 'To the co-editors, with love'. So I must have done something right.

But one day, about a year after it was published, I received a tiny envelope in the post which contained a letter on a tiny sheet of paper. I am not exaggerating. She was given to using very small sheets of headed notepaper inside very small envelopes. In this letter, Debo told me that she had put together a second volume of her pieces - my heart leaped - and that it was to be called Home to Roost. John Murray was to publish it. It was a done deal.

What I did wrong and why she did not think my small publishing house worthy of her any more, I will never know, because we never communicated again. I was deeply hurt and very upset.

Susan had even "put together and privately printed" a collection of tributes - To Debo, on Her 85th Birthday. From Her Friends. She says that Debo cried when she got her copy.

This was really painful for me to read. But I don't think it is an uncommon experience to have someone suddenly "drop" another person, with no explanation.

She writes about two formerly well-known writers who are not well read today: C.P. Snow and J.B. Priestly. Have you read their books? Susan Hill knew both the men, and says of Priestly:


But I think he would have minded very much that no one much under the age of fifty has read or even heard of him - at least not beyond the brilliant revival of An Inspector Calls which is also a standard GCSE text these days. At least he would have been pleased about that.

It is a melancholy thing to consider once famous writers being forgotten, and how they would feel about it. On the other hand, they might be re-discovered. The British Library Crime Classics publications are bringing back writer after writer that many of us find delightful. And the whole e-books industry has introduced me to many authors I had never heard of. So, perhaps there is hope for Mr. Snow and Mr. Priestly.


Took some books to the charity shop. Included a couple of my own, spare paperbacks.

Nice lady serving. 'Oh, thank you so much. Oh, and a Susan Hill book! She is very popular.'

SH: I'm pleased to hear it.

NLS: Actually - here are two on the shelf that are signed copies.

NLS: Oh yes. (Leans over confidentially.) We can get 10p more for them if they are signed.

A little like being at one's own wake, isn't it?!


I am certain that writers are formed in part by the books they have read and absorbed and it troubles me that not all writers or aspiring writers are Reading Writers. Increasingly, I meet creative writing students who do not read. They are ignorant of the best. They are often even ignorant of the worst. So how on earth can they want to write themselves? How do they know what it is all about? Read, read, read is the only advice I give, if asked. Read those writers who are better than you or I will ever be. In the end, that is the only way you will learn.

Susan Hill's March chapter was quite pensive, with many thoughts about writers and reading from the Ladybird books to Robert Lewis Stevenson. I learned a lot and greatly enjoyed her literary month.
Posted by Nan