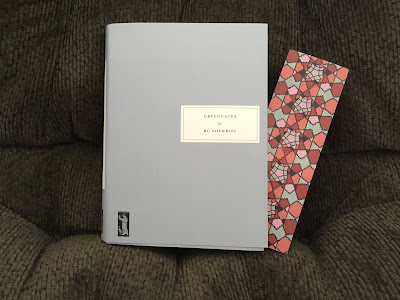 When I read Persephone Books' description of Greengates here, I bought it immediately. I thought that this would be an interesting take on a time of life that I am in just now - retirement of a husband, and how it affects the wife. Tom Baldwin is retiring at 59 years old, and comes up with first one scheme and then another to make this a terrific new page in his life’s book, but each of them fails and he falls into despair. In the meantime, his wife Edith misses her daily routines. When Tom decides to spend an hour every day reading in the drawing room it disrupts Edith’s much-loved nap. They find they have nothing to say to each another. When he worked they would talk about their separate days. Now there are no stories to relate. Edith does try to encourage and support him, but the situation feels hopeless. They have disagreements. Tom gets angry with their old maid. We get glimpses of their fond feelings for one another, but the times are fleeting.

As I write this, it sounds bleak. And it is. Until a beautiful fall day.

Saturday, the 28th October: a date that Tom and Edith Baldwin were to remember with feelings close to reverence: a date of deliverance.

Edith suggests they take a walk they haven’t done since before the war. They both remember it fondly, and so they do it. When they come to the little village, they see a new road and houses being built. At first they are chagrined. They fear the beautiful countryside will be ruined. Then they are coaxed into visiting one of the houses by an eager agent who is new to the job. They both fall in love with it. It is clean and bright and cheerful and welcoming; everything their house in London is not. They begin to look at their home with new eyes. They see how dingy and uncomfortable and old-fashioned it is. Tom connects it with themselves. They are older and need a fresh start.

The book proceeds to show all the work involved in making this happen. They don’t want any of their old furniture in a beautiful new house. They must sell it, and the house, and there is concern there won’t be enough money. But it all works out, and the house of their dreams is built on a few acres, and in sight of the footpath they walked upon to reach it. The author does a wonderful job of getting inside Tom and Edith’s heads to show us the excitement, worries, enthusiasm, and fears that accompany their big decision.

On their first evening in Weldon Close, Tom meets a man in the neighborhood who wants the homeowners to build a clubhouse that will offer activities for the residents. The man is a most disagreeable sort (and racist, the reader recognizes), though Tom doesn’t see this at first because their evening is spent in the warm glow from whisky, and all things seem possible. Again, Sherriff shows us all the emotions that are stirring around in Tom’s head. He concurs with Mr. van Doon about some ideas but has his own notions that he wants to put forward.

At nearly the end of this fine, wise book a couple in what is now known as the ‘third age’ begins a most agreeable, pleasant, and worthwhile life. The last part is told by a visitor who used to work with Tom, and I found it a lovely way to tell the readers what had happened in the ten years since Tom and Edith arrived. Greengates offers hope to the reader. It shows that older age does not have to be lonely and without purpose.

It may seem as if I’ve told you the whole story, but really this is just the bones of the tale. RC Sherriff is a master of showing the lives of ordinary people. His characters are as real as if they lived next door. I enjoyed reading it, but I didn't love it as I did Sherriff's The Fortnight in September (which I wrote about here). Though I identify with the couple's stage of life, they are very different from Tom and me. Retirement for him has been getting to the things around the farm that he didn't have time for when he was working. And we have children and grandchildren so we luckily and happily don't lack for companionship. We would never be part of a club, and would rather read than participate in a round of social activities.

Before Persephone, I had never heard of this author, and I am so grateful they have brought his books to modern readers.
Posted by Nan