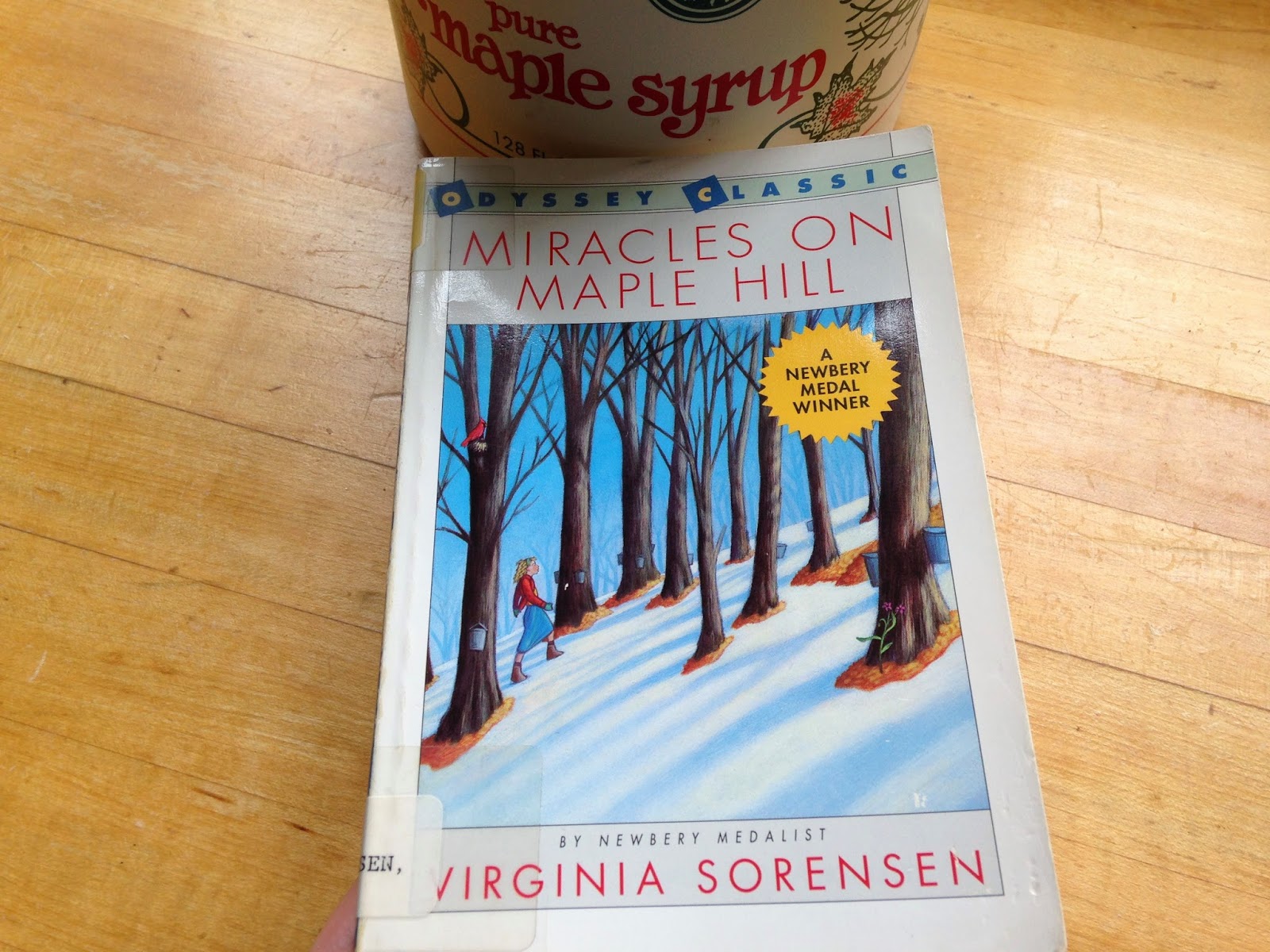 If asked what is my favorite kind of fiction the answer would be a book that shows the healing powers of place, particularly the natural world, and Miracles on Maple Hill certainly does this. Ten-year-old Marly’s father has post-traumatic stress disorder- before it had a name- in the years after the Second World War. He jumps at the slightest noise, he strikes out verbally at his family, isn’t able to work, and is constantly tired. His wife has an idea for the whole family to travel from their home in Pittsburg to a rural area of Pennsylvania, where she used to spend summers with her grandmother. Marly has always been smitten with the stories her mother told her of those days, and she feels that it will be just what her father needs. The plan is that he will stay on after their visit and fix the place up, while they come weekends, and then stay the whole summer. As you will probably guess, working on the house, gardening, and sugaring help the man find peace and joy in living again.

There are neighbors Mr. Chris and his wife Chrissy who are great friends to the whole family. Mr. Chris, sensing a kindred spirit, teaches Marly about all the ‘miracles’ that happen up on Maple Hill, beginning with the maple sugaring season. He says,

“Can you smell that, Marly? Did you get that whiff just then from the sugarhouse? I told my wife this morning, this time Lee’s [Marly’s mother] coming for the first breath of spring.”
She had got it. It was absolute sweetness, like a drift of a scent from a lilac bush. Like passing an orchard in full bloom. But different. A different sweetness -“Your great-grandmother used to say there was all outdoors in that smell,” Mr. Chris said. “She called it the first miracle when the sap came up.”

He brings her out to the woods when the spring flowers come along. I learned about a plant I have in my own yard that I’ve written about in my letters, bloodroot. 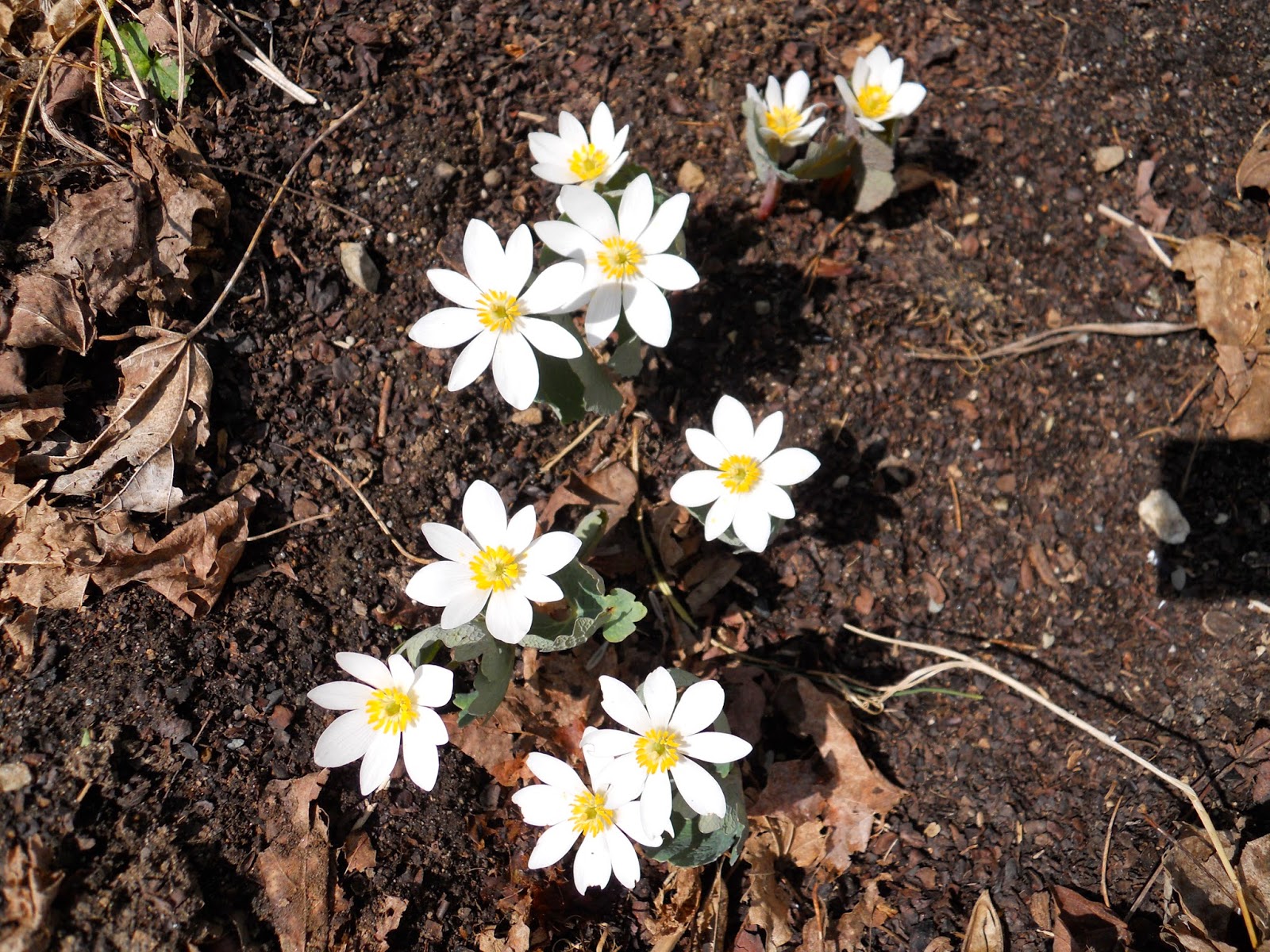 I’ve never taken a picture of it in bud, which Mr. Chris calls, “Easter candles.”

All over the ground around her were great green leaves, each with a cleft in the side. Up through each cleft came a long thin stem, and on top of each stem stood a pointed bud exactly like a candle flame.

And the reason it is called bloodroot:

It had a scarlet root, as bright as blood. … it’s absolutely true that if anybody eats it, his heart will stop in a day.

He goes on to tell her about hepaticas.

Folks thought, Mr. Chris said, that hepatica leaves were good for liver medicine because the leaves were the shape of livers. “So it’s even called ‘liverwort,’ sometimes,” … it’s got more names than you can shake a stick at. Some say it’s a ‘herb-trinity’ because of the three leaves. Some call it a ‘squirrel cup.’ And some call it a ‘mouse-ear.’ Take your choice.”

Marly’s mother remembers “Grandma saying you couldn’t bring things out of the ground until they were ready.” But Marly learns from Mr. Chris that you can ‘help’ them come along by pulling off the leaf covering.

The flowers had to push their stems up through layers and layers of old brown leaves, and sometimes one of the leaves was extra tough and wouldn’t move off, so the poor flowers were stuck together and coudn’t open. The minute Marly broke off the tight old leaves, the flowers opened right away. … Mr. Chris made her feel as if every flower was a particular old friend. It was grand to see his face when he noticed something for the first time that year.

Marly has a brother two years older, and the book shows the 1950s idea that boys were the adventurers and girls were scared of the unknown. He goes off on his own, and she feels badly. Mr. Chris opens up a world that becomes rather hers alone, a separate one from her brother’s, which builds her self-esteem. And he comes to admire her, as well.

As summer draws to a close, Marly is filled with regret that she won’t see the fall, which may just be the most beautiful time of year on Maple Hill. There are decisions to be made, and each family member has a voice in them. Young readers will wonder what will happen, and worry when Mr. Chris gets sick. They will be interested in a 'hermit' who lives nearby. So, the book is a beautiful mix of information and appealing story.

Miracles on Maple Hill received the Newbury Medal in 1957. It is a wonderful book that doesn’t speak down to children and makes them feel included in the written conversations. I’ve read this a couple times over the years, and love it more with each reading. And I’ve now bought copies to share with my grandchildren as they get older.
Posted by Nan