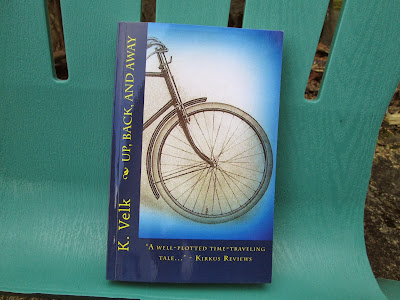 I think we are living in a golden time of writing about, and for, children. Although Up, Back, and Away isn't labeled as a children's book per se, it could be read and enjoyed by the same young person who loves the new books by the Meloy siblings: Wildwood and Under Wildwood by Colin, and The Apothecary and The Apprentices by Maile; and The Penderwicks series by Jeanne Birdsall. Each of these books offers strong characters in adventuresome circumstances. They don't feature the all-too-common sad and/or abusive family situations. These books will make the reader feel good, not bad. They show that kids (and adults) can have interests that are not like everyone else's. These are the books I would have loved at 12, and 16, and 40, and now at 65.

In Up, Back, and Away we meet 15-year-old Miles McTavish from Dallas, Texas. He is in Vermont on vacation with his parents. But there is something he is supposed to do while he's there, something which is very important to an older friend of his at home. Professor Davies has had a heart attack, but he still manages to tell Miles

"I was out on my morning ride as usual, when she stopped me," the Professor had explained in a breathy whisper at the hospital, with a heart monitor beeping just above his head, "I had never seen her myself, but of course my father had told me about her in his last letter."

This woman, 'The Gypsy'

had ordained that Miles was to go up Ashburton Mountain in northern Vemont. Once there, he was to find the English Boy trail and its Birch Gate. He was to put the little stone that the Professor had given him into the cylinder-shaped handlebar bag. Then he was to ride the Sunbeam down through the Gate. 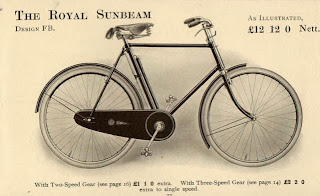 When Miles travels through the gate he will go back in time to 1928, and proceed with the mission he has been given


to find a girl with a gift, a girl born out of her time, and uncover a secret that was not meant to be. After he had collected them both, he was to return home with them through another Gate on the other side.

I can only imagine how hard it would be to end up in another time and search for an unknown person - to meet this girl and that girl and wonder which is 'the one.' Every step of the way is fraught with nervousness.

The place Miles is to go is called Quarter Sessions.

The prospect of asking for a job at the great estate was almost as frightening as staring down the English Boy trail had been. Truth be told, he had no skills and wasn't particularly good at anything, assuming model railroading and being good at movie and music trivia of his own day were not much in demand here.

Back at home Miles had built a model railroad English village he called Dibden. When Miles first arrives back in time in Tipton, England here is his reaction.

Miles had a gratifying sense of deja vu as the car putt-putted up Tipton High Street. They passed the butcher shop, the milliner's, the bridge over the river Hawls, the sweet shop, and so forth. Each establishment presented itself almost exactly as he had laid it out in his model Dibden. How? He wondered. How could he have known? And who, or what, had inspired him - driven him really - to build his Dibden? Something, obviously, had been working on Miles for a long time. He had been prepared, somehow, marked for this journey, and long ago. Thinking about all this made him uneasy. There were apparently forces at work in his life that he had never before sensed or even guessed at. What did that mean about what was happening to him now? Or what would happen next? Was he in charge of his own destiny, or was he just being moved around in time and space like some kind of chess piece? He had been drafted to serve in this bizarre role, that much was clear - but by whom or what, and why him?

When I wrote about Tom's Midnight Garden, I offered a quote from Zilpha Keatley Snyder about what makes a good fantasy novel. The groundwork must be built on details that are true. The reader must believe, and this reader absolutely believed in Up, Back, and Away.

There is a great blog just for the book with lots of interesting tidbits.

Addendum: A few readers wondered where they had heard of this book. It may have been from me back in June here.
Posted by Nan