I'm offering recipes for the signature drinks of the three spring horse races. Our friend Caryn joined us for each race and we had a wonderful time cheering on I'll Have Another, and then Union Rags after I'll Have Another was retired.

Make a simple syrup by boiling sugar and water together for five minutes. Cool and place in a covered container with six or eight sprigs of fresh mint, then refrigerate overnight.

Make one julep at a time by filling a julep cup (or any glass you wish) with crushed ice (or ice cubes), adding one tablespoon mint syrup and two ounces of Early Times Kentucky Whisky.
Stir rapidly with a spoon to frost the outside of the cup. Garnish with a sprig of fresh mint.

Happily I had fresh mint in the terrace garden. I didn't take a picture of the finished drink, but here is the simple syrup. 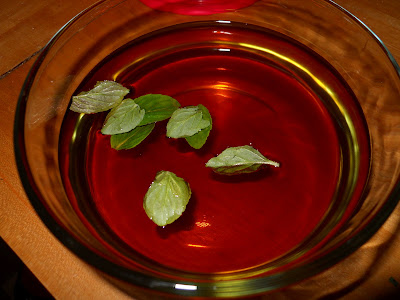 Isn't it pretty? Tom used it for several days after the Derby. You have to take the words of Tom and Caryn for this since I don't like whisky/bourbon. They were wowed, and said it was terrific!

There were a few different variations but this is the one I made: 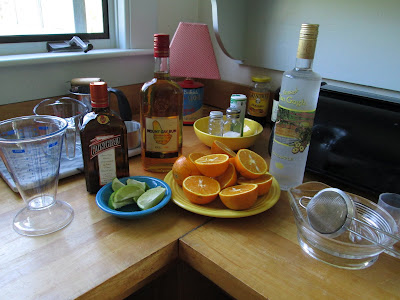 I did try this one, but only drank a bit. Way too sweet for me. I think I'm not a rum girl or an orange juice-in-a-cocktail girl. I made myself a cosmo. However, both Tom and Caryn thought it was divine.

And then we come to the Belmont Stakes. It seems the jury is still out on what to have as the one and only official drink. There have been three so far.

Shake first six ingredients with ice, then top with 7-Up and club soda. Garnish with mint sprig and lemon wedge.

We put the nix on this one because of the sherry, and also, there are a lot of ingredients that we didn't think sounded particularly appealing all mixed together.

And then we have:

This sounded entirely too sweet to us, and Caryn felt a little squeamish about the peach schnapps, so I went searching for an alternative, and found the Belmont Jewel:

Horse racing and whiskey cocktails go hand-in-hand. With the third leg of horse racing's Triple Crown coming up soon, what better way to celebrate either at the track, at home or perhaps at an off track site than to sip the official cocktail of the Belmont Stakes? The Woodford Reserve Belmont Jewel is a quick and easy bourbon cocktail with pomegranate and lemonade and is sure to be a crowd pleaser. 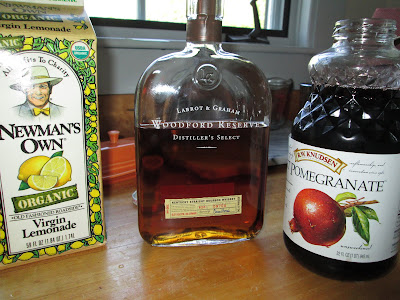 Because I'm so not a whisky fan, I made mine with Van Gogh pineapple vodka. The verdict on this drink was mixed. I think I liked it the most, though it was a little sweet for me. Caryn didn't like it at all, while Tom said it grew on him the more he drank. :<)

Oh, and for even more fun we drank the Belmont Jewel out of Red Solo Cups! 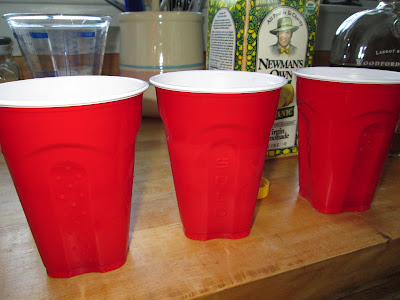 Have you heard Toby Keith sing this, or better still, seen the video?? And here's a history of the iconic cup.
Posted by Nan